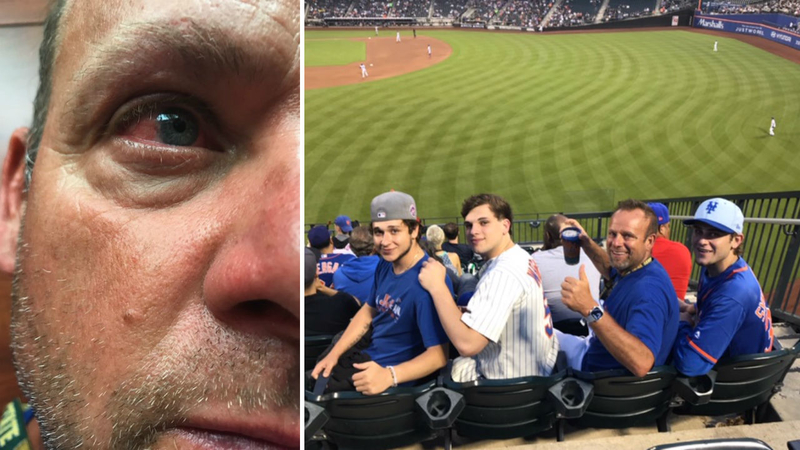 7 On Your Side Investigates: Mets fan sues team over T-shirt cannon injury he says nearly blinded him

NEW YORK -- A Mets fan who says he was nearly blinded by a flying T-shirt at a Mets baseball game is suing the team for damages and is asking the ballpark to stop using T-shirt guns during games.

According to the lawsuit filed in Queens County Supreme Court late last week, Alex Swanson was "severely injured" by a T-shirt cannon during the June 5, 2019 home game against the San Francisco Giants.

Swanson says a T-shirt cannon sent a T-shirt flying into his face while he watched the game with his children, causing him to temporarily lose consciousness and suffer a detached retina.

The lawsuit accuses the ballpark of "negligence, recklessness and carelessness" and alleges Swanson suffered permanent damage to his vision and his eye.

"This is a very unfortunate situation that could've and should've been avoided if the Mets took the appropriate measures," said Swanson's attorney, Dustin Levine, in a statement. "My client was enjoying what he thought was a perfect day with his three sons and ended up suffering a severe injury that will likely affect the rest of his life."

It's not the first time courts have been asked to consider the safety of T-shirt guns.

The Houston Astros are fighting a similar lawsuit filed by a woman who broke her finger during a flying T-shirt encounter at a game in July 2018. According to court records, the trial is currently scheduled to begin in Harris County Court in May 2020.

In another incident, in 2013, the University of Arkansas stopped using T-shirt cannons after a launcher misfired, sending a student to the hospital.

The study also found the T-shirt launchers had enough power to injure an eye and break facial bones.

The study recommended safety training and strict operating rules to mitigate the risks.

The rule has typically protected teams from liability due to injuries suffered from flying balls and bats and has been used as a defense by other teams in similar lawsuits.

"So fans really assume the risk of being injured," said Jordan Kobritz, a sports law professor at SUNY Cortland, noting also that, "It varies state to state...There have been inroads made on the baseball rule."

In recent years, multiple courts have determined that while the "baseball rule" provides protection in the case of flying balls and bats that protection does not necessarily apply to other objects launched during a game.

"The Mets must be held accountable, and I hope that we will reach an amicable outcome," Levine, Swanson's attorney wrote in a statement. "He (Swanson) has not ill will toward the Mets or the players, but he wants to make sure that the cannon is never used again to protect future fans."