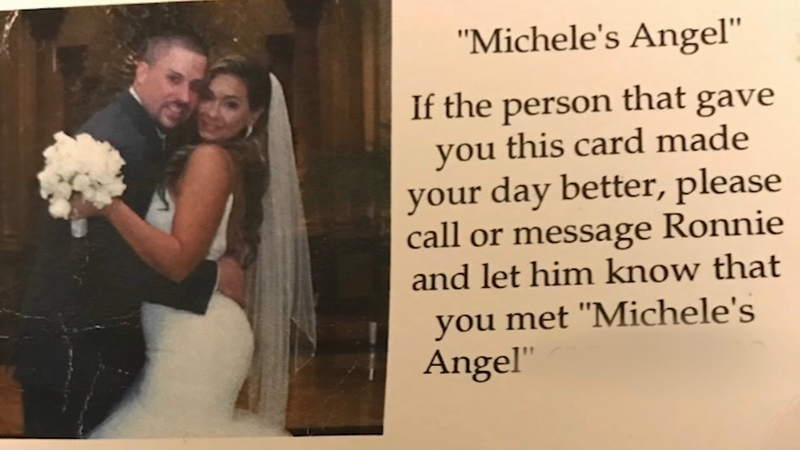 DREXEL HILL, Pennsylvania (WPVI) -- It's happened in a home improvement store and a few miles down the road at a diner. Someone is spreading kindness in Delaware County, Pennsylvania.

Rebecca Ford, a server at Tank and Libby's in Drexel Hill, was working when a stranger paid for a customer's meal.

Along with paying for the check, the good Samaritan also left the customer a card that told the story of a woman named Michele who had passed away on December 7, 2016.

"It's a good thing to do for someone who's passed away, take a tragedy and do something really positive for it," said Ford.

The back of the card encouraged the customer to reach out to Michele's widower, Ronnie Lomonaco.

"At first, I thought maybe it was a wrong number, didn't respond, didn't think twice on it. Until two days later, I received a similar message," said Lomonaco.

He has received 10 of these messages in the last month.

The timing means a lot more to him than a holiday miracle.

"Only four days after we returned from our honeymoon, she would suddenly and unexpectedly passed away," he said.

Now, three years later, Lomonaco said he has no idea who's doing these good deeds in his wife's name - but he doesn't necessarily want to find out either. He said that's part of the magic of it.

"I think there's beauty in the unknown. If this person wants me to know who they are, at whatever given time it may be, I'm sure they will let me know," he said.

However, the kind stranger may be even harder to find, because there's reason to believe there's more than just one.

"It's kind of created a nice circle of people, just creating more of a community," said Ford.