FBI hands over missing fossils to Brazilian authorities in Delaware 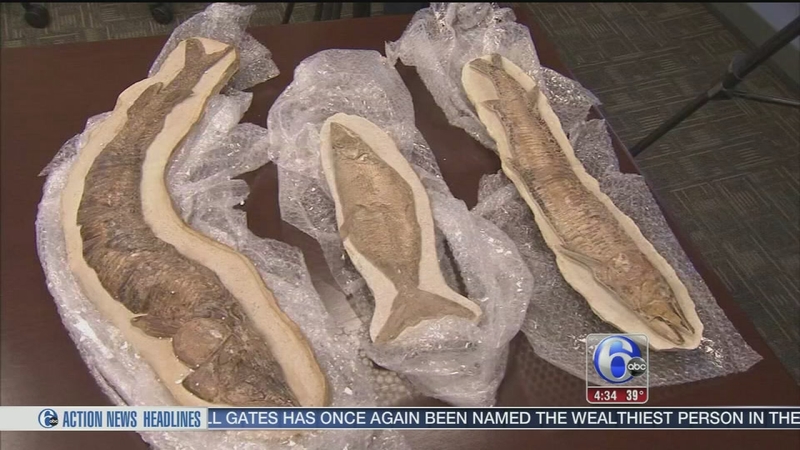 WILMINGTON, Del. (WPVI) -- How did three rare fish fossils from Brazil end up for sale online? That's what federal agents are trying to figure out after discovering someone trying to sell the $110 million-year-old relics.

On Monday in Wilmington, Delaware the FBI handed to Brazilian Police three fish fossils that once swam in a now vanished inland sea 100 million years ago.

The trio, valued at $20,000, are part of a larger investigation to find a dinosaur fossil taken from Brazil worth $700,000 on the black market.

Maruico Valeixo of the Brazil Federal Police explains, "We have a special division of federal police that is responsible to do investigations of similar things."

The fish are from when dinosaurs still roamed.

There are wealthy private collectors of dinosaur fossils. Actors Nicholas Cage and Leonardo DiCaprio among those reportedly bidding for major finds.

Some fossils come from a robust black market, much like the market for stolen art.

Special Agent Paul Cavanagh of the FBI says, "It's a network of collectors, private collectors usually, who deal with the same person who is acquiring these things, usually through illegal means."

Dr. Jean Woods from the Delaware Museum of Natural History says when a real fossil ends up in the black market, much of its scientific worth is compromised - its original location, its age, and what other items were nearby.

"And how all the pieces of that whole ecosystem fit together. And once you've removed that fossil from that sort of setting, that information is all lost," explained Dr. Woods.

With some fossils offered online, the FBI was asked was there a roll for the public?

Special Agent John Webb tells us, "If a citizen sees something and they think it's not accurate, they need to contact law enforcement."

The FBI would not say where or how they came across the three fish in this case, or is anyone has been arrested.