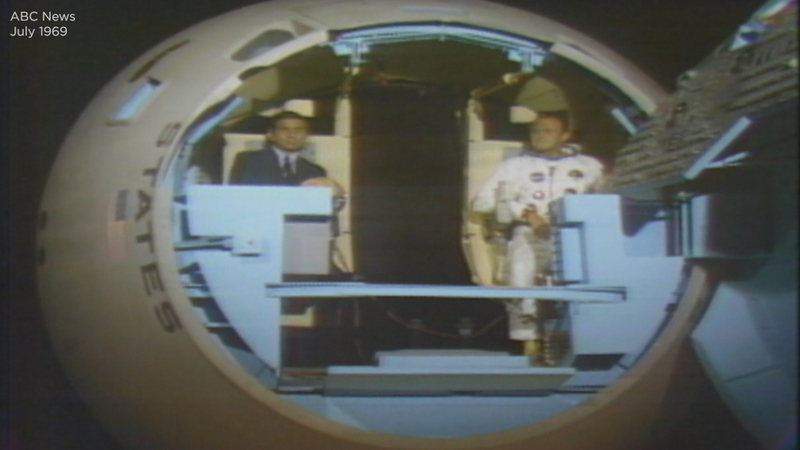 Go inside a mockup of the Apollo command module

Leading up to the historic 1969 Apollo 11 mission, ABC News built a mock Apollo command module to give viewers an inside look at how astronauts would travel to the lunar surface.

See more of the mockup built as part of ABC News' space landing coverage set in the 1969 report in the video player above, which also features ABC News space correspondent Jules Bergman and NASA North American project engineer Bob Rahn discussing how the command module was designed to function.

Here's how NASA described the command module in its science data archive:

"The CM was a conical pressure vessel with a maximum diameter of 3.9 m at its base and a height of 3.65 m. It was made of an aluminum honeycomb sandwich bonded between sheet aluminum alloy. The base of the CM consisted of a heat shield made of brazed stainless steel honeycomb filled with a phenolic epoxy resin as an ablative material and varied in thickness from 1.8 to 6.9 cm. At the tip of the cone was a hatch and docking assembly designed to mate with the lunar module.

"The [command module (CM)] was divided into three compartments. The forward compartment in the nose of the cone held the three 25.4 m diameter main parachutes, two 5 m drogue parachutes, and pilot mortar chutes for Earth landing. The aft compartment was situated around the base of the CM and contained propellant tanks, reaction control engines, wiring, and plumbing. The crew compartment comprised most of the volume of the CM, approximately 6.17 cubic meters of space. Three astronaut couches were lined up facing forward in the center of the compartment. A large access hatch was situated above the center couch. A short access tunnel led to the docking hatch in the CM nose. The crew compartment held the controls, displays, navigation equipment and other systems used by the astronauts.

"The CM had five windows: one in the access hatch, one next to each astronaut in the two outer seats, and two forward-facing rendezvous windows. Five silver/zinc-oxide batteries provided power after the CM and SM detached, three for re-entry and after landing and two for vehicle separation and parachute deployment. The CM had twelve 420 N nitrogen tetroxide/hydrazine reaction control thrusters. The CM provided the re-entry capability at the end of the mission after separation from the Service Module."