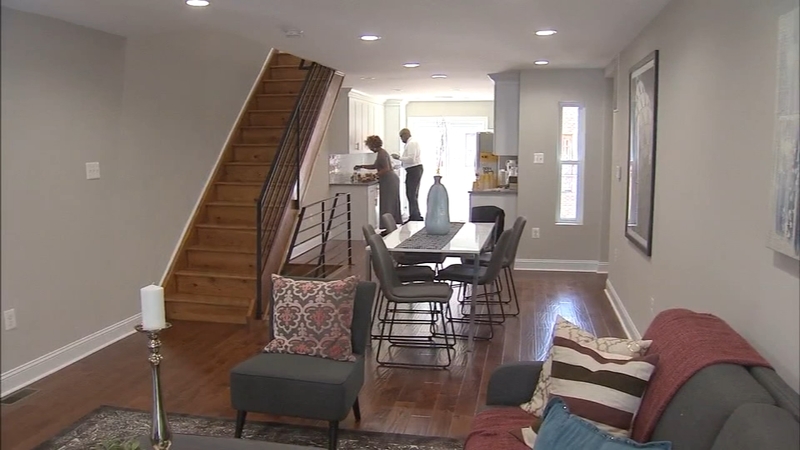 COBBS CREEK (WPVI) -- It has been 33 years since the MOVE bombing in the Cobbs Creek section of West Philadelphia that killed 11 people and destroyed dozens of homes.

It's been a long road to rebuilding, but there's finally a revival happening as newly rebuilt homes are ready for new residents.

Rehab work continues on a total of 36 row houses at 62nd, Pine and Osage streets. Work was never completed on them, but they have their place in Philadelphia history.

Watch file video from 1978 of confrontations between Philadelphia Police and MOVE members before and after the shooting of a Philadelphia police officer.

This Cobbs Creek neighborhood burned down in the May 13, 1985 MOVE disaster.

The homes remained vacant until now. A young development firm bought the eyesores and is now rehabbing and finishing all of them for resale.

Watch file video from Action News' coverage of the 1985 MOVE bombing in West Philadelphia and its aftermath.

"Almost everything is new. All the joists, all the wood behind the wall, and all the insulation - we gutted everything completely out of the house," explained Rodney Ross of AJR Endeavors.

The developers showed off a finished model on Wednesday that has been sold already.

"Happy to still be able to serve the people here and be part of the joy that finally came out of it," Blackwell said.

Longtime neighborhood residents like the looks of things so far. But with the new houses priced at more than a quarter million dollars, they worry higher taxes may drive them out.

"Anytime you build quarter of a million dollar houses in our area, where do we come in? Where do we fit in," asked resident Mildred Fowler.

"The city has a number of programs that are available city-wide to help people with property tax relief," says Gregory Heller from the Redevelopment Authority.

The developers hope to have all of the homes rehabbed and sold by the beginning of 2020.