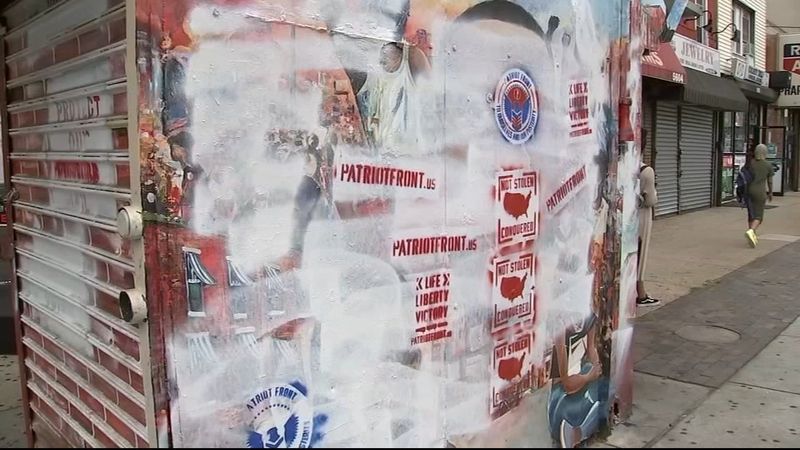 PHILADELPHIA (WPVI) -- Concern and outrage are growing in the Olney section of Philadelphia after a mural of George Floyd was vandalized on Friday.

Residents Action News spoke with believe the mural, which was painted on a newsstand, was defaced sometime overnight.

White paint and "Patriot Front" logos and insignia covered most of the artwork.

Until just recently, the mural at the intersection of 5th Street and Olney Avenue in Philadelphia was one some residents proudly posed with.

"I saw this and took my kids and took a picture in front of it. I have it," said resident Nia Hines.

On Friday morning, those who saw what had become of mural lashed out in many ways.

Some in quiet disbelief, others sad, but above all else there was anger.

HATE GRAFFITI: Outrage is growing in Olney section of city after mural of #GeorgeFloyd was painted over and tagged with the logo of an extremist white nationalist group as deemed by organizations like the Southern Poverty Law Center.@6abc pic.twitter.com/DfH1ZR0INy

The vibrant display of color and imagery invoking a community's call to action against social injustice, erased in shades of white paint and hate.

Drawing perhaps the most attention were the logos and insignia of an organization deemed by many, including the Southern Poverty Law Center, as white nationalist hate group.

"They killed him. So, for them to come back here and actually put up 'not stolen, conquered' it's an insult to all of our intelligence," Hilton said.

Residents in Philadelphia and the surrounding region gathered on Tuesday to remember George Floyd one year after he was murdered by former Minneapolis Police Officer Derek Chauvin.

Philadelphia police were made aware of graffiti Friday.

It remains unclear if nearby surveillance cameras captured the person or group responsible.

Whether or not the artist had been informed already remained unknown.

"This is destroying property," Hines noted.

While community groups and artists are now working on a plan to restore the mural, many are still left wondering one fundamental question.

"Why? You have a right to your views and everything but why mess up somebody's artwork?" Hines added.

Community groups have committed to try and restore the mural.

A city spokesperson issued the following statement to Action News:

"It's sickening and disturbing that someone would vandalize a mural honoring George Floyd, who was brutally murdered at the hands of a police officer. Mr. Floyd was a victim of police violence and the institutional racism present in our society. We strongly condemn this act of intolerance and hate in Philadelphia, and of course, the defacement of public art. We will not tolerate this. Hate and racism have no place in our city, and we urge all Philadelphians to continue to work together to enact police reform and dismantle institutional racism."

Floyd, who was Black, died last year after a white Minneapolis police officer, Derek Chauvin, knelt on his neck, pinning him to the ground for about 9 1/2 minutes as Floyd pleaded for air. Floyd's death sparked worldwide protests and calls for change in policing in the U.S.