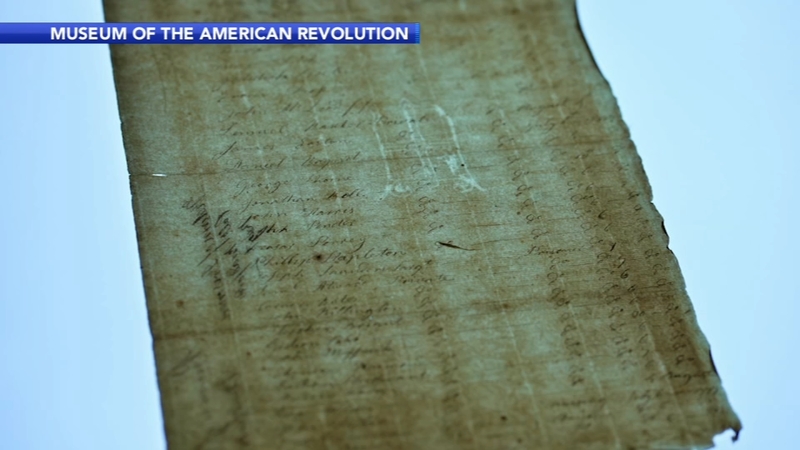 Artifacts tell stories of soldiers of color in American Revolution

PHILADELPHIA (WPVI) -- The untold stories of soldiers of color are now being brought to life thanks to newly obtained historical artifacts at the Museum of the American Revolution in Center City.

These original stories of African American and Native American men in uniform will go on display for the first time.

Timothy Cesar, Jeffrey Brace - these are just two of the hundreds of names found on Muster rolls and payrolls of soldiers of color in the Continental Army.

"They all related to men of African American, Native American Indian decent who wore the uniform of the United States, who fought to secure the independence of our nation and whose histories and involvement were largely forgotten," said Scott Stephenson, President and CEO of Museum of the American Revolution.

The museum acquired the artifacts from a private collector late last year and most of them are in excellent condition. Museum staff are now tasked with cross referencing each name listed with the national archives and state records to unearth that individual's story.

Those names include that of "Pomp London," a nickname for African Born slave Jeffrey Brace.

His story is cross-referenced by a memoir he dictated that was later published about his life.

"He enlists in the Continental Army to obtain his freedom and s is discharged with the badge of merit," said Stephenson. "In the collection are these documents relating to his enlistments. Relating to his pay, one of them, he signs meticulously with his mark."

"And that is a story that goes through all of those years since then. Every single one of these of conflicts, men of color have served in uniform and have come back at the time of peace and have found a nation that has still not lived up to all of the aspirations of those founding documents," adds Stephenson.