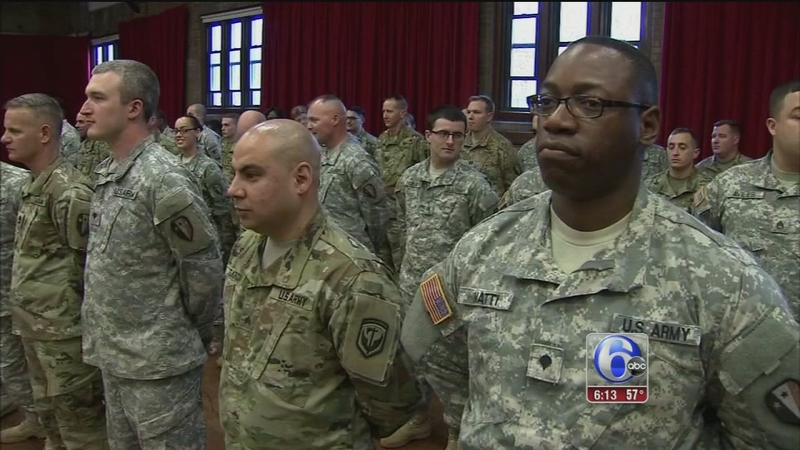 LAWRENCEVILLE, N.J. (WPVI) -- The state of New Jersey is paying tribute to the men and women of the New Jersey National Guard who came to the rescue after Superstorm Sandy.

When Superstorm Sandy hit in 2012, 346,000 homes in New Jersey were damaged or destroyed. 2.7 million people were without power.

Under a state of emergency, the New Jersey National Guard was called in to set up shelters and kitchens. They rescued 7,000 people and their pets and cleared endless roads.

Almost four years after that devastating event, Lieutenant Governor Kim Guadagno has begun pinning US Dept. Of Defense Humanitarian Service medals on the 2,300 soldiers and airmen from the Guard who responded after Sandy.

"It's my privilege to say thank you on behalf of a grateful state and a grateful nation and to thank every single one of you for being always ready, always there," Rep. Tom MacArthur said Tuesday.

And they were there, under terrible conditions.

"We were looking for survivors because we were flying up and down the coast. We didn't know if there were going to be people stranded in houses that were going to be floating on the water," MSgt. Mark Olsen said.

"Made sure the individuals there were fed and clothed and that the conditions were considered sanitary," MSgt. Carmen Giamforcaro said.

"It was definitely different from everything we've ever done before, which was more wartime oriented," Spc. Robert McAllister said.

Moving people, supplies and equipment was a challenge for the guard members, some of whom responded even though their own homes were flooded.

"It was really amazing to be able to participate in that and humbling to see how much these people were giving back to us," SSgt. Karen Foulds said.

This is just the first of many ceremonies. More will follow until all of the 2,300 citizen soldiers who responded to Sandy have their medals.

"They would have done it anyway, they didn't do it for the medal. They would say I was just doing my job ma'am, but we need to say thank you," Lt. Gov. Kim Guadagno said.