"He was definitely selfless, caring, loving, determined," one friend said. "Kyle - he was one of our brothers."
ABCNews
By Kaylee Hartung 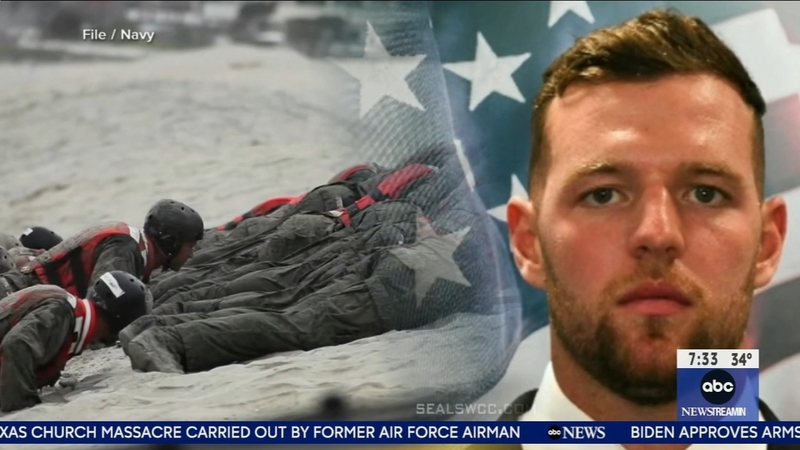 MANALAPAN, New Jersey -- The Navy continues to search for answers after one candidate in the SEAL selection process died and another was taken to the hospital just hours after successfully completing the most punishing week in the 6-month assessment known as "Hell Week."

The Pentagon is asking for time to allow the Navy to investigate the death of 24-year-old Kyle Mullen of Monmouth County, New Jersey, the fourth candidate to die during SEAL selection since 2001. The other sailor, whose identity will not be made public, is said to be in stable condition.

The Navy identified Seaman Kyle Mullen, 24, of Manalapan, New Jersey, as the SEAL candidate who died.

"Through this grueling five-and-a-half-day evolution, most of which you're awake for, there's a couple breaks where you'll grab one to two hours of sleep, but only a few times. You're tested as though you're in combat," Retired U.S. Navy Captain Duncan Smith, executive director of the SEAL Family Foundation, said.

New Jersey Governor Phil Murphy called Mullen a legend in his hometown of Manalapan. He ordered all state flags be lowered in his memory.

Our thoughts and prayers are with the family of Kyle Mullen, the Navy SEAL candidate from Manalapan who tragically died while in training in San Diego. He represented the very best of our state. pic.twitter.com/PazWqqxwjs

The talented athlete and scholar was honored with a memorial on the high school football field he once played on wearing the number 44.

In a "Good Morning America" exclusive, Mullen's friends since childhood described the passion and drive Mullen brought to his pursuit of becoming a SEAL.

"He said, 'What's the most elite thing I could do in the world, and that's become a Navy SEAL.' So that's what he set out to do," friend Jayson Rybak said.

"If anyone can do it, it's Kyle," friend Nick Surhoff said.

Both friends last communicated with Mullen just before he began the infamous "Hell Week" course.

Now, they are consoling each other and the Mullen family through this shocking and difficult time, saying there's an emptiness without him here.

"He was definitely selfless, caring, loving, determined," Surhoff said, holding back tears. "Kyle - he was one of our brothers. It's tough that he's gone, but he'll always be with us and always be following us everywhere we go."