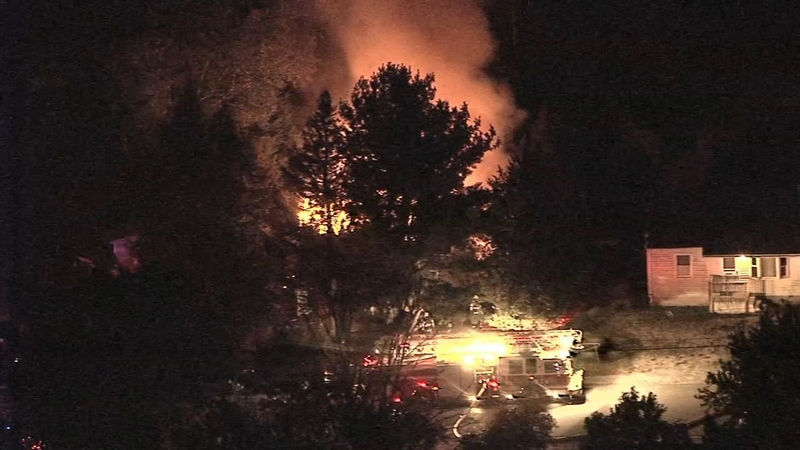 BROWNS MILLS, N.J. (WPVI) -- Neighbors say they tried to save those inside a burning home in Burlington County that left two people dead and another was injured.

The fire started just after 8:30 p.m. Tuesday in the 500 block of Willow Boulevard in Browns Mills. An elderly couple and their adult son were inside.

Tina Muccie knows she is lucky to be alive.

Muccie said she lived in the house as a caretaker. She saw the smoke and called 911.

Lore Smith, 92, was pronounced dead last night after being taken to Lourdes Emergency Department at Deborah Hospital in Pemberton Township. An elderly male was pronounced dead at the scene. His name is being withheld pending notification of family members.

Muccie and other neighbors said they tried to save them but were overwhelmed by all of the smoke.

"Apparently they tried to get out of bed," said Muccie. "She was on the floor. I saw her feet. I wet a towel and I was going to try to drag her out but the smoke was unbelievable, It just consumed you."

William Goodman lives right next door. The siding of his own house melted.

He said he had just dropped off his neighbor, that adult son, after working with him earlier. Goodman was home just minutes before he spotted the flames and ran to help.

"I ran out because his mom and dad were in there. We tried to get in there and save them because they're real old, but we couldn't," Goodman said.

The smoke was too thick. Goodman and first responders heard the screams coming from Inside.

"We ran around the side. We broke a window because you could hear them. We heard them; we couldn't get them out," Goodman said.

Firefighters were able to pull two people out of the home, one of them was that adult son.

"We went in there and we extricated three people out of there, transported two to the local hospital, one we flew out and the other was already deceased on the scene and the second died at the hospital," said Pemberton Township Fire Department Chief Craig Augustoni.

Lore Smith, 92, was pronounced dead last night after being taken to Lourdes Emergency Department at Deborah Hospital in Pemberton Township. An elderly male was pronounced dead at the scene. His name is being withheld pending notification of family members.

Chopper 6 was overhead Wednesday morning showing the destruction left behind by the fire. Investigators returned to the house as they worked to determine the cause.

"She was a very sweet lady. She was the mother of the neighborhood," Goodman said.

The state fire marshal and the prosecutor's office are among the authorities investigating.