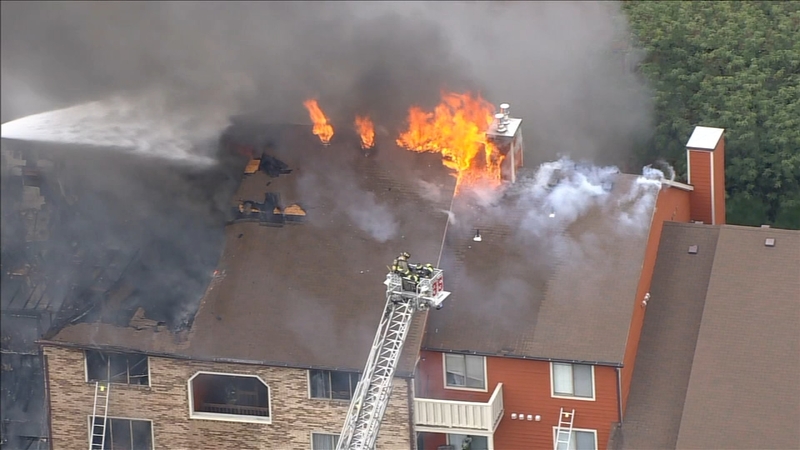 MOUNT LAUREL, N.J. (WPVI) -- One firefighter was taken to the hospital to be evaluated for heat exhaustion after a fast-moving fire in Mount Laurel, N.J.

Firefighters were called here just before 1:00 p.m. for a report of a fire at the Brittany Lakes and Meadows Condominiums on Auburn Court.

Multiple companies responded as be blaze quickly spread through the condos.

"We're all family in this building. Everyone says, 'hi.' But when you see something like this all you can do is keep moving forward in life," said resident Erick Rodriguez.

"They had to kick the door in because she was really screaming and barking. But they got her out in time so that's all that matters," said Rodriguez.

Police say twenty condo units had to be evacuated.

"Somebody came and knocked on the door, she said she was knocking the door and her kid saw smoke and that's when she came and started knocking on everybody's door," said Neil Purcell.

Anthony Buehlman was working at a home nearby when he heard about the fire. He and a co-worker said they knocked on some doors to see if anyone was still inside.

"I feel bad for the people. It's heartbreaking to see something like this," said Buehlman.

Keith Gray and his family live on the end unit and were relieved when firefighters pulled their three cats out of the home safely.

"By the time I got here, I couldn't even pull into the complex. I had to walk down and that's when I saw everything was up in flames," said Gray.

No word on how the fire started.