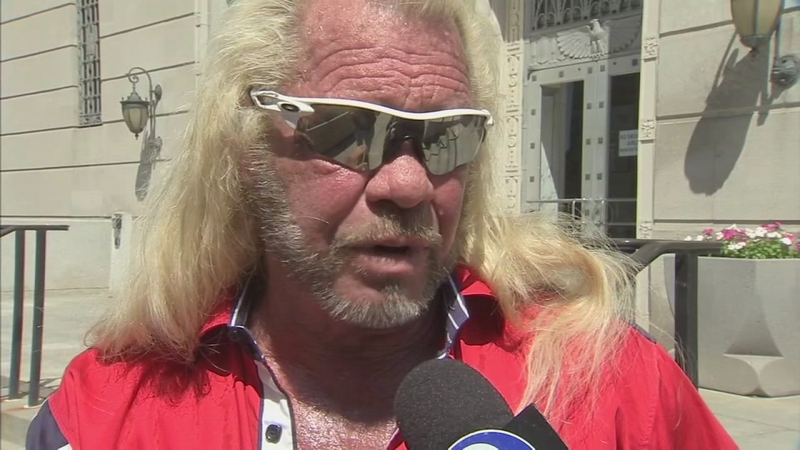 TRENTON, N.J. -- The former star of "Dog the Bounty Hunter" has joined a legal effort to have New Jersey's new bail rules thrown out, claiming the changes are "not working and are causing deaths."

Duane "Dog" Chapman spoke Monday during a news conference at the federal court building in Trenton, where lawyers announced a wrongful death lawsuit brought by the family of Christian Rodgers.

The 26-year-old Millville man was fatally shot in April while walking on a street in Vineland. The man charged with shooting him had been released from jail following his arrest on a weapons charge a few days before the shooting occurred.

"This hug-a-thon campaign has got to stop," Chapman said. "It's killing people, as you can see. What we need now is for people to stand up for your rights, for your lives, for your children and grandchildren's lives. ... Without a deterrent, this is what happens."

"I keep hearing how they say this has been 'a success,'" she said through tears. "This was successful at giving me an opportunity to lay across my baby's casket crying my eyes out."

The lawsuit's defendants include Christie and the state's attorney general, Christopher Porrino. It claims in part that the shooting suspect - Jules Black, 30, of Vineland - wasn't detained because of bail reforms that went into effect this year and that were championed by the Republican governor.

A Christie spokesman referred a request for comment to the attorney general's office, which declined to comment.

Black has been charged with murder and weapons charges stemming from Rodgers' slaying. He remains jailed, and his attorney has maintained his client's innocence.

Proponents of the reforms say they were enacted as a way to keep violent offenders detained until trial while providing poor, low-level defendants the opportunity to be freed. But some lawmakers and law enforcement officials say it has led to some people being quickly released because they weren't deemed a threat and then later rearrested on new charges.

The number of defendants in jail before having a trial was down 20 percent on June 30 compared to Jan. 1, according to data released by the state last week.

Of the nearly 22,000 defendants to appear in state courts in the first half of the year, only 14 percent were sent to jail. The majority got some level of pretrial monitoring, including GPS bracelets and check-ins with court officers.

Chapman said the reforms provide "zero accountability" for defendants, who assume they will be granted their release pending trial.

To address those concerns, Porrino in May announced tougher guidelines for prosecutors to seek detention for defendants accused of serious gun crimes and those with a history as a sex offender or on parole or pretrial release for another crime.