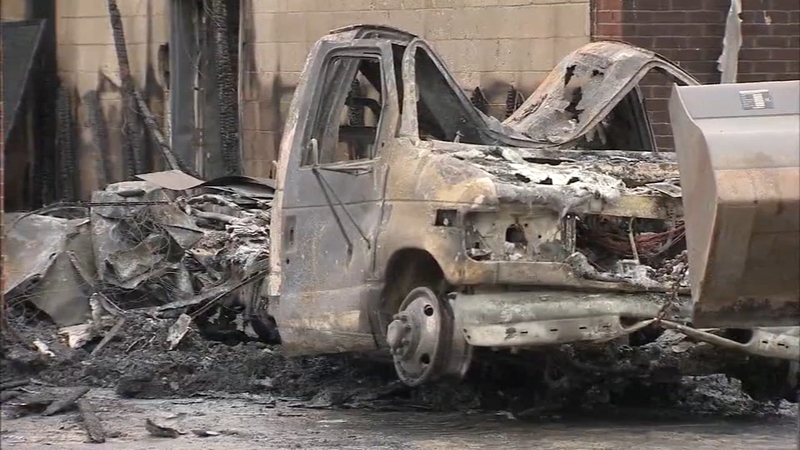 The blaze broke out around 4 a.m. at Woodstown American Legion Ambulance Association, located at Charles D. Wilson Hall on Maple Court in Woodstown.

Officials believe it started at one end of the building, while crews were in the lounge at the other end.

"We were resting," EMT Rebecca Roberts told Action News. "And my partner came in and was like, 'Everybody has go to get out of here!' And we were like, 'Why? Is there a call?' And we ran out, and there was smoke everywhere."

The building was full of oxygen tanks. Officials believe they created numerous explosions as they were destroyed in the fire.

The fire was finally placed under control shortly before 6 a.m.

Video from Chopper 6 recorded after sunrise showed only the outer walls of the structure still standing.

The blaze appeared to have destroyed everything inside. Fortunately, no injuries were reported.

Despite what's happened all 47 employees are expected to keep working.

"It's definitely hard," said EMT Lauren Conrad. "I've been here for 7 years... and it's like home to me. It's like watching your home burn down."

Ambulance company president Joe Valentine says thanks to some assistance the ambulance services are still operational.

"We've had some ambulances from Gloucester County cover us during the incident," he said. "Our neighboring town over in Elmer, they've given us one of their ambulances to use. So that's in service now for us."

The company provides EMS coverage for Woodstown Borough and Pilesgrove Township, in conjunction with Salem City and other municipalities.

It is now working with its insurance company to get the recovery process underway. The plan is to rebuild and get back to normal as soon as possible.

There was no immediate word what may have sparked the fire.

The president of the ambulance company says he thinks there could be upwards of $2 million in damage.