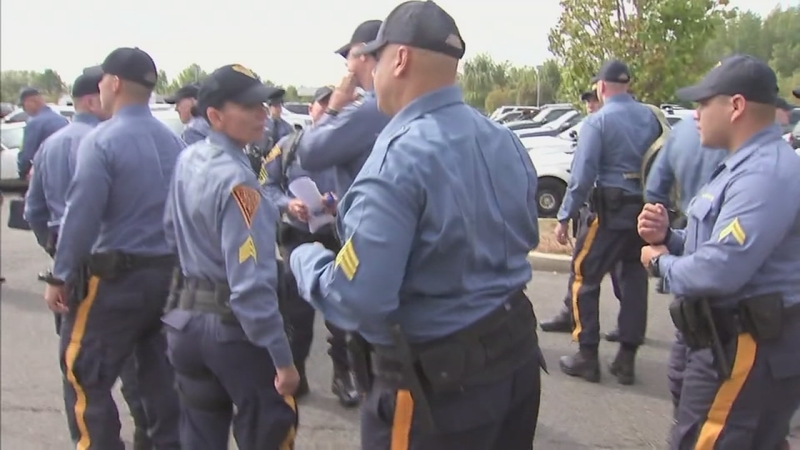 HAMILTON, N.J. (WPVI) -- A group of 48 New Jersey State troopers are on their way to Puerto Rico to help relief efforts on the island after it was devastated by hurricanes Irma and Maria.

The troopers expect to be working traffic control and security.

"They're also going to be serving as security for gas stations and food and water distribution sites to make sure that happens in an orderly fashion," NJ State Police Patrick Callahan said.
It's a personal mission for Sgt. Fernando Torres who has extended family in Puerto Rico.

He said, "We've been having a hard time keeping in touch with them because they haven't had a phone. I feel a duty to go. I feel like it's an obligation to go and help people out that are in need."

Fifteen police cruisers will go by barge to meet up with the troopers and they are taking plenty of gear. An advance team has been in Puerto Rico since last week.

Trooper Dennis Ehret of the NJ State Police said, "It's devastation obviously. We don't really know what we're walking into, but we are prepared for anything."

"I told them daddy's going down there to help, going with a team of great professionals. It's the least we can do to go down and help those folks in Puerto Rico. We know all too well how that affects people," he said.

In just the last month, New Jersey has sent people and resources to Florida, Texas, South Carolina and the Virgin Islands. But more than 1000 personnel are being deployed to Puerto Rico.
Capt. Bob Linden of the NJ State Police said, "When Sandy hit us five years ago we took in a lot of other outside state law enforcement agencies that came in to help us. So now it's our turn to return the favor."

The deployment is expected to last about two weeks and then another group will be rotated in to replace these troopers.