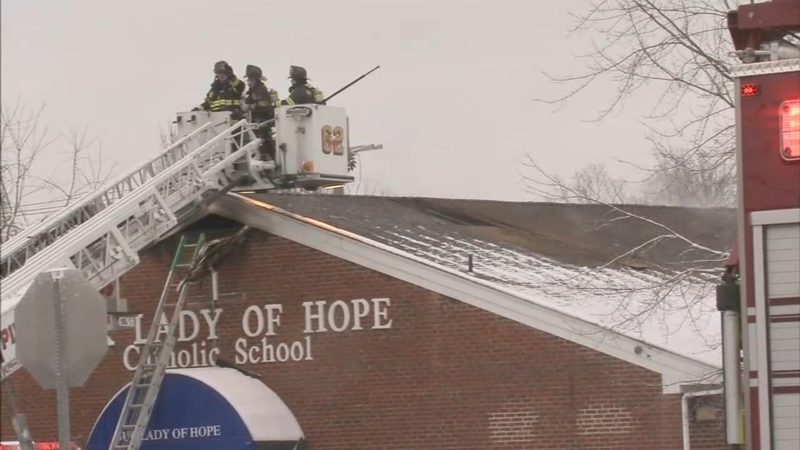 The fire broke out shortly before 8 a.m. Friday at Our Lady of Hope in the Blackwood section of Gloucester Township. There were no students in the school at the time because classes had been canceled Friday due to a snowstorm.

Smoke could be seen coming from the school's roof when firefighters arrived. The fire was brought under control about 45 minutes later.

It's not the news Carmen Williams wanted to wake up to.

"My granddaughter saw it on the news and said, 'isn't that where you work?'" said Williams, the administrative assistant of Hispanic Ministries

The fire was reported by a maintenance worker.

"They said it was smoldering all night and ignited this morning," said the Rev. Joseph Szolack.

"I drove up the pike and oh my God, you couldn't get here. And that you see the firefighters on the roof. It was just sad," said Eileen Ploski.

Firefighters worked quickly, but not before the flames damaged classrooms where students take classes like technology, art and library.

As crews cleaned up, parents helped out. They scrambled to move Friday night's father-daughter dance to another school.

"We were just in shock. We wake up this morning preparing for the dance tonight and we hear that our school is on fire," said parent Jude Vicario.

Investigators say an electrical problem may be to blame for the fire, but there has been no official ruling yet.

The school will be closed until Wednesday, but the part of the building that was damaged will likely be closed for the rest of the year.