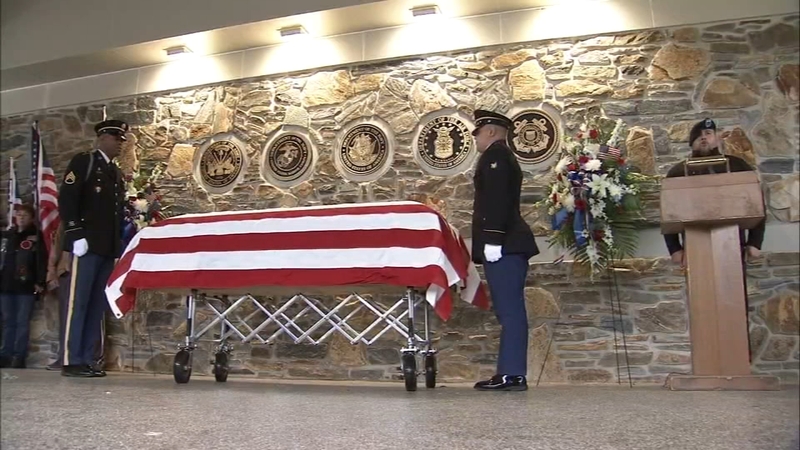 WRIGHTSTOWN, N.J. (WPVI) -- On Friday, strangers became family to a veteran who died all alone with no known family at his home in Atco, New Jersey back in December.

Most had never heard of his name and didn't know his life story, but they showed up by the dozens to pay respect and say goodbye to 77-year-old Peter Turnpu.

Leroy Wooster of Wooster Funeral Home and Cremation Service said, "We have to give honor to those who have served and Peter would have had no one here if we didn't reach out."

Wooster said when he heard about Turnpu's death he couldn't just let the Vietnam veteran be buried alone. He paid for the funeral and invited the community to attend the service.

"I really did not want the publicity and I am not a hero. The hero is Peter. The heroes are the veterans who are here to honor him," he said.

News about Turnpu's death and the act of kindness performed by Wooster spread and the community opened their hearts.

There was no way they were going to let a veteran be buried without the proper send off.

"He was a veteran and we are all brothers at heart. He didn't have no family, he didn't have no relatives and that's why we are here for him," said Jack McGrath of Gibbsboro, New Jersey.

Mac McCarty of Atco, New Jersey added, "I am here today because this guy lived a couple of blocks from me and I have a lot of family so it means a lot. These guys deserve everything they get."

Tom Engkliterra with the National League of POW and MIA Families received the flag.

"I am an American, He's an American. We are our brother's keeper, so it was an easy thing for me but I will never forget this I'll tell you that," he said.

Not everyone who showed up was a stranger, one woman says she once lived in the veteran's neighborhood and had to come to say goodbye.

"I think he would be very overwhelmed by the turnout. It's a shame that a lot of our veterans don't get this kind of attention when they are living and I think that is something we really need to address in this country," said Jenifer Cook of East Greenville, Pennsylvania.

Many who attended the service felt this was a sense of duty. They wanted Peter to know his life was not in vain and he was not forgotten.

"He is looking down and he is smiling. He is definitely smiling at us," said William Boyd of Pine Hill, New Jersey.

Sydney Breidenbach of Hilltop, New Jersey said, "This is his family now. We are going to escort him over to General Doyles Cemetery and stand in a flag line and pay him tribute."