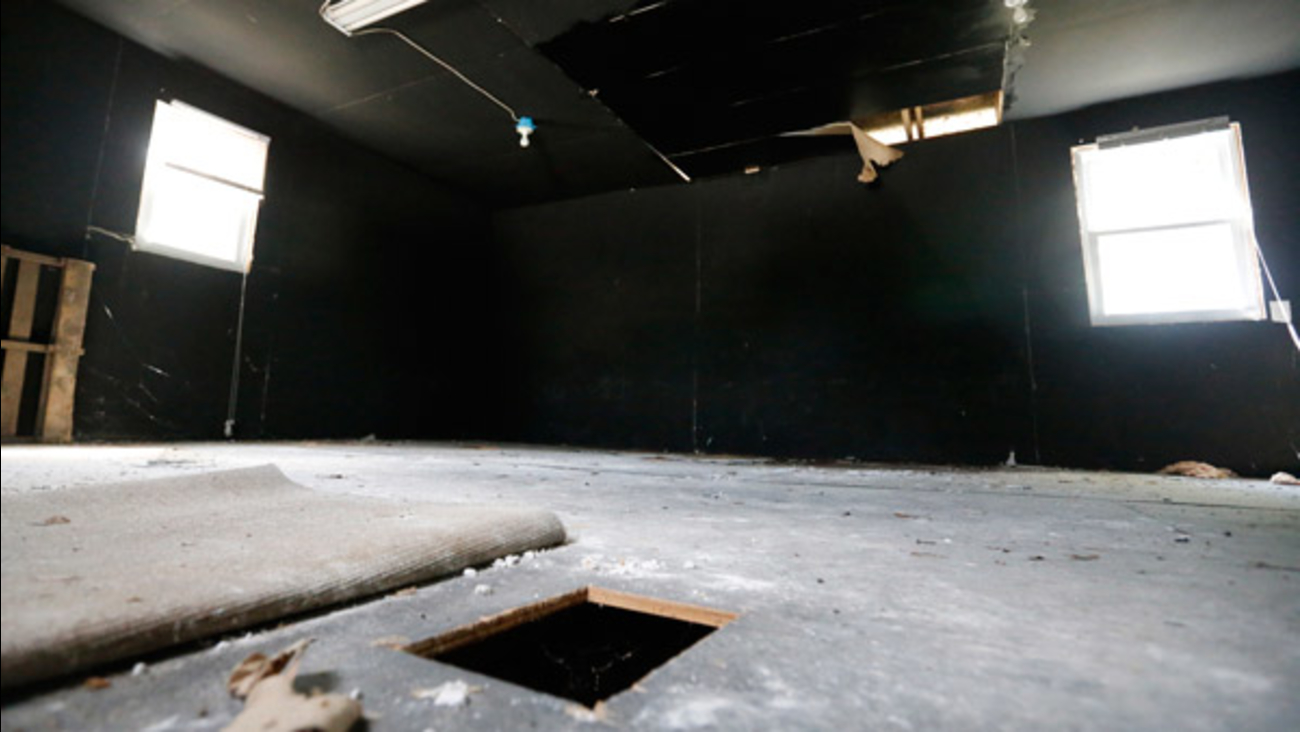 In this June 15, 2015, photo, a hole cut in the floor by investigators at the dog fighting building at the Bad Newz kennel remains during a tour of the Good Newz Rehab Center. (AP Photo/Steve Helber)

SMITHFIELD, Va. -- The black two-story shed still stands out back at 1915 Moonlight Road - a haunting reminder of the brutal dog fights that took place upstairs when NFL quarterback Michael Vick owned the place.

A few steps away, a dog infirmary with eight grimy stalls sits empty in the suffocating heat of an early-summer day. Sick or injured dogs now are nursed to health in the air-conditioned comfort of the property's five-bedroom, 4,600-square-foot home.

The ghostly relics of the former Bad Newz Kennels have been retained because the current owner of the 15-acre compound, the anti-chaining organization Dogs Deserve Better Inc., wants to keep people aware of animal cruelty now that public attention to the 2007 dogfighting case that landed Vick in prison has faded. The star quarterback served an 18-month federal prison sentence for running a dogfighting ring.

"We want them to see that this is what dogs go through," said Kenny Sayre, chairman of the Dogs Deserve Better board of directors. "We don't want people to forget."

Some things have changed on the property, however. The metal poles and heavy chains that once restrained Vick's pit bulls are gone. The full-size backyard basketball court has been replaced by fenced dog runs. And many of the trees that once obscured aerial views of the dogfighting operation have been cleared out, providing an expansive, grassy playground for the able-bodied among the 13 to 17 dogs typically residing there.

But the transition from dogfighting to dog rescue has not been without controversy. In 2012, Surry County authorities seized a pit bull terrier named Jada from Dogs Deserve Better and charged the organization's founder and executive director, Tamira Thayne, with animal cruelty and failure to provide adequate care to a companion animal.

A judge ordered Jada's return, saying there was no evidence of cruel treatment, and Commonwealth's Attorney Gerald G. Poindexter dropped the charges against Thayne.

Stung by the suggestion that she would mistreat an animal, Thayne filed a lawsuit in federal court against Surry County chief animal control officer Tracy Terry and other county officials.

"Thayne suffered extreme humiliation, embarrassment, inconvenience, anxiety, and interference with life, as a result of the baseless criminal charges," the lawsuit says. "Ms. Thayne's reputation also has been harmed significantly, including but not limited to a significant decrease in invitations for speaking engagements and other professional and personal injury and harm to her reputation."

The lawsuit, which seeks unspecified monetary damages, also alleges that the seizure of Jada was illegal because it was not authorized by a search warrant.

Contributions have taken a hit because of the charges, the complaint says. The nonprofit group's filings with the Internal Revenue Service show that donations plummeted from more than $1.1 million in 2012 to $317,138 in 2013.

U.S. District Judge John A. Gibney dismissed the Surry County Board of Supervisors as defendants but allowed the lawsuit to continue against Terry and five people, whose names are unknown, who participated in the seizure of Jada. The defendants have denied any wrongdoing in court papers, and settlement talks are underway.

Thayne, who recently stepped down as executive director of the organization she founded in 2002, and Terry declined to be interviewed because of the pending litigation.

Sayre said the notion that Thayne would ever abuse a dog is "mind-boggling." He said the trouble started after a disgruntled former employee leveled bogus accusations.

In the lawsuit, Thayne alludes to what she believes to be another reason she was charged: "Thayne has been an outspoken critic of Surry County, Prosecutor Gerald Poindexter, and Surry County Animal Control's anemic handling of the Michael Vick dogfighting enterprise and belated prosecution."

Poindexter was on medical leave and unavailable for comment.

As the court case inches along, the new leadership at Dogs Deserve Better is trying to mend fences as best it can and look to the future. Sayre, whose wife Julie manages the operation, said that when he joined the board they went to the county animal shelter to introduce themselves and received a cool reception.

"We don't have that personal relationship," said Denise Cohn, who succeeded Thayne as executive director.

Despite the troubles, the organization that estimates it has rescued, rehabilitated and adopted out approximately 400 chained or penned dogs - none of them holdovers from the Vick operation - has big dreams of expanding. Sayre said long-range plans call for expansion of the house and construction of a "super center" that can house 50 dogs and a veterinary clinic.

Meanwhile, the dog at the center of the organization's recent controversy is doing well. Julie Sayre said a visitor from Suffolk saw Jada playing with her best friend, Copper, and adopted both.