WPVI
By Sarah Bloomquist
FAIRMOUNT PARK (WPVI) -- A lot of people still operate under the assumption that the Schuylkill River in and around Philadelphia is a polluted mess of a waterway.

But the reality is that things are changing, and changing for the better.

This is a story of a fish - a big fish caught right near the Fairmount Water Works. 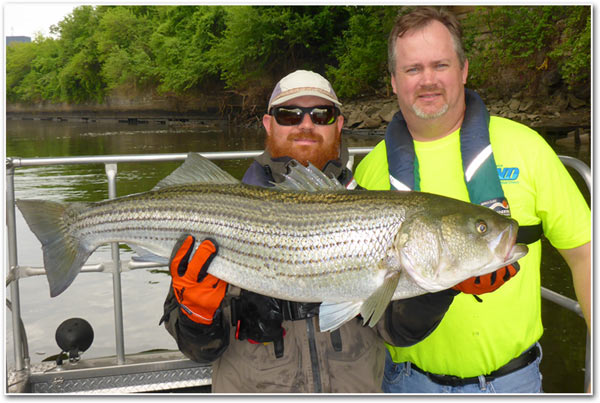 Scientists say the fish, a big striped bass, is proof that efforts are working to improve the quality of the water.

"We were really excited because it had been a couple of years since something that large had been documented," aquatic biologist Joe Perillo said.

They captured and released the fish from the Schuylkill River near the Fairmount Dam last month as part of an annual spring survey. The size of the striped bass was surprising and so was the variety of species; more than fifty types now swim in the section that flows through the city.

"And a resurgence of migratory species which is a great indicator that the basin itself is getting healthier," PWD scientist Lance Butler said.

Those migrating fish can get where they want to go now by using the improved fish ladder rebuilt in 2008 allowing bigger fish to swim upstream.

The water department credits local, state, and federal partnerships, activism, awareness and proactive measures such as the water department boat caught on the Action Cam Monday. It skims away pollution improving both the look and the chemistry of the river.

Birds and even turtles are returning, but there's more water quality work to be done.

Action News is told the biggest problem for the river right now is storm water runoff. Heavy rain carries salt, sewer runoff, and pollution like lawn chemicals into the river. But work is going on every day to make this a cleaner river for both fish and the people who live and play alongside it.