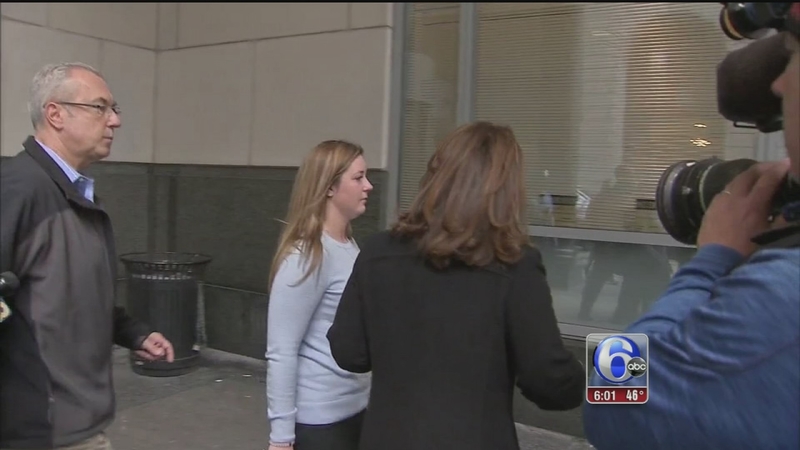 PHILADELPHIA (WPVI) -- It started with a slur, as a gay couple walking to get pizza crossed paths with 15 young adults celebrating a birthday in the city.

"Is that your (expletive) boyfriend?" one of the suburban friends sneered. A scrum ensued that left one gay man with a broken jaw and the other with a pair of black eyes.

"People feel so privileged that they can just do anything and say anything they want. And it's so wrong," forewoman Joan Bellinger said Friday after a Philadelphia jury convicted a police chief's daughter of assault and other misdemeanors, but no felonies, in the attack last year.

Kathryn Knott, 25, of Southampton, had turned down a plea offer that yielded probation for her two male co-defendants.

Knott took the stand this week to deny that she helped instigate the fight or injured either victim. But the jury agreed with witnesses who said she shouted slurs and struck one of the men.

Her earlier Twitter posts, shown to jurors, included a slur for gay women to describe a bad hair day and the hashtags "ew" and "gay" on a post about men kissing.

The attack spurred officials to expand the city's hate crime law to include protections for sexual orientation.

Kathryn Knott learned her fate in a Philadelphia courtroom on Friday.

However, all three defendants insist the dispute was not fueled by any homophobia.

Knott told the jury that she had run to the fight to try to intervene. She sobbed after the verdict as she huddled with her parents. She remains free on bail until her Feb. 8 sentencing, when the options range from probation to a two-year jail term.

"He didn't deserve that, but she shouldn't be wrongly accused either," he argued to jurors this week.

The jury over three days considered but ultimately rejected the most serious aggravated assault charges, although Bellinger said she leaned that way.

"She left (one victim) laying there in a pool of blood, and just went off and went about her merry way," said Bellinger, 67, a retired human resources professional. "I am so offended ... by the fact she came into my city, and did this to people that she knew nothing about."

Co-defendants Kevin Harrigan and Philip Williams, also of Bucks County, are barred from visiting Philadelphia during several years of probation and required to do community service at an LGBT organization.

The nonjail sentence upset people in the gay community, although the victims supported the deal to avoid the emotional toil of a trial.

"(They) preferred very strongly that we give a sentence that, rather than just send someone to jail, sent a message and maybe changed what these people were about," Assistant District Attorney Michael Barry said.

Violating the city's expanded hate crime law is a summary offense that carries a maximum sentence of 90 days in jail.

"People will surprise you in both directions," said Nellie Fitzpatrick, the city's director of LGBT Affairs.

"The thoughtfulness and open-mindedness of (the victims) have continued to surprise me," she said. "And just because people are clean-cut or have good parents ... doesn't mean that somewhere inside there they don't harbor feelings that you wouldn't expect."