Victims say they were baited into parking illegally.

And still Frank Goebel says his car was towed by George Smith Towing, and snapped a photo of where his car was allegedly parked.

He's one of several motorists who are now coming forward after our story aired Tuesday when a resident caught several alleged tow traps on camera.

Many drivers claimed there was no signage.

The mayor's office confirmed, "The Major Crime Unit is investigating this particular incident, and we are also evaluating our current towing laws so that when Council comes in the Fall we can take legislative steps to prevent illegal towing."

"If you put up a sign and tow from a place that is not on our registry, then you're going to be held liable and fined and sanctioned," said Quiñones-Sanchez.

We stopped by George Smith Towing for a second time on Wednesday, but they had no comment.

"There needs to be a very conspicuous sign posted warning people that hey, if you park here, you're taking a risk of getting towed," said Karen Gus, L&I spokesperson.

L&I says 3-feet signs need to be visible, a digital photo of proof must be provided and police must be notified when towed.

"No police action, just a tow truck. Very frustrated. Two hundred and five dollars, plus a taxi ride at 11:30 at night downtown," said Goebel. "I was just absolutely livid."

We spoke with Lew Blum, a large Philadelphia tow company, by phone. He said the towing industry needs to organize to establish the correct way to operate, and the drivers who claim to be victims need to have a refund.
Related topics:
south philadelphiaphilly newsparkingtowingscamsscamtraffic
Copyright © 2020 WPVI-TV. All Rights Reserved.
RELATED 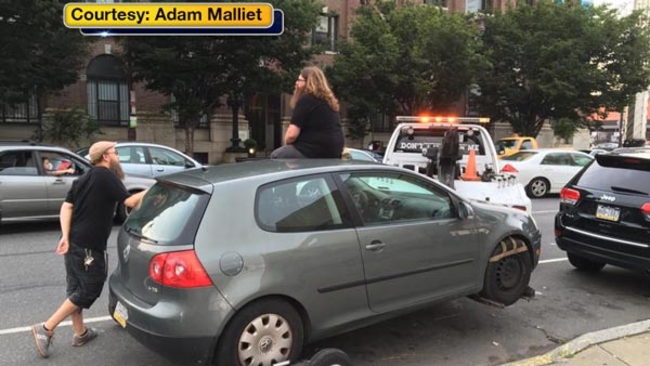