Officials: 'Dirty old Santa' traveled to have sex with child 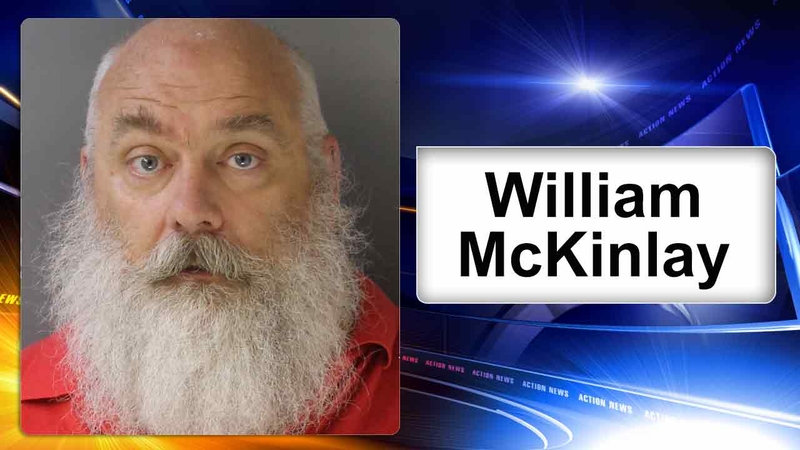 Officials: 'Dirty old Santa' traveled to have sex with child

RIDLEY TWP., Pa. (WPVI) -- A Philadelphia man who described himself as 'dirty old Santa' has been arrested for traveling to meet a child for sex, the Delaware County District Attorney's Office said Thursday.

Authorities say McKinlay attempted to lure who he thought was a 14-year-old girl for sex.

The arrest comes at the conclusion of an undercover investigation by the Delaware County Criminal Investigation Division (CID) Internet Crimes Against Children Task Force (ICAC) and Ridley Township Police Department.

Officials say on April 12, Officer Tim Kearney of the Ridley Township Police Department was acting in an undercover capacity on an investigation for the Pennsylvania ICAC Task Force.

Posing as a 14-year-old girl named "Stephanie," Officer Kearney responded to an internet advertisement. After responding to the ad, officials say McKinlay and "Stephanie" began exchanging messages during which "Stephanie" confirmed she was 14-years-old.

During an online conversation with the undercover police officer, McKinlay described himself as "dirty old Santa."

Officials do confirm that he was a seasonal employee at Macy's in Philadelphia, although they could not confirm his exact position.

Action News found on his Facebook account, McKinlay posted a picture of himself as a Santa at Macy's Santaland in Center City.

Believing he was speaking to a 14-year-old online, officials say McKinlay described how he would love to see her naked and teach her about sex.

On June 12, they began discussing meeting up in person, and two days later, it was confirmed they would meet at 4 p.m. on Wednesday, June 21 at an ice cream shop in Ridley Township.

Officials say McKinlay told the teen who was actually the undercover cop, it would help if she didn't wear a lot of clothes in the first place, and told her to wear a sleeveless t-shirt, shorts, sneakers and nothing else.

On Wednesday, McKinlay arrived at the ice cream shop in Ridley Township to meet who he thought was a 14-year-old girl, officials say. Instead he was met by the Ridley Township Police Department.