WPVI
PHILADELPHIA (WPVI) -- For the second night in a row, demonstrators marched down Philadelphia streets to protest the fatal shootings of two black men by police in as many days.

Thursday night's protest in response to the deadly shootings of Alton Sterling in Louisiana and Philando Castile in Minnesota began around 7 p.m. at the Pennsylvania Convention Center in Center City.

Local activists and faith leaders in town for the AME Church Convention took to city streets.

"Whenever you have something like what happened in Baton Rouge and Minneapolis, you have to say and do something," organizer Reverend Mark Tyler said.

Marchers walked arm and arm chanting "I believe that we will win" and "No justice, no peace."

"We should feel hurt when this happens, white, black, Hispanic," Goldman said.

"If you ever think that your that department that can't be impacted by that, that's your first mistake. You just hope that if something tragic happens in your department that you establish relationships that will stave off unfortunate incidents in your neighborhood," Philadelphia Police Commissioner Richard Ross said.

For Tanya Dickerson whose son was shot and killed by Philadelphia police during a traffic stop in 2014, today was personal.

"America has killed my son 250 something times in the last year. His name is Philando, his name is Alton," Dickerson said.

On Wednesday night, protesters blocked the entrance ramp to I-676 resulting in a number of people taken into custody. 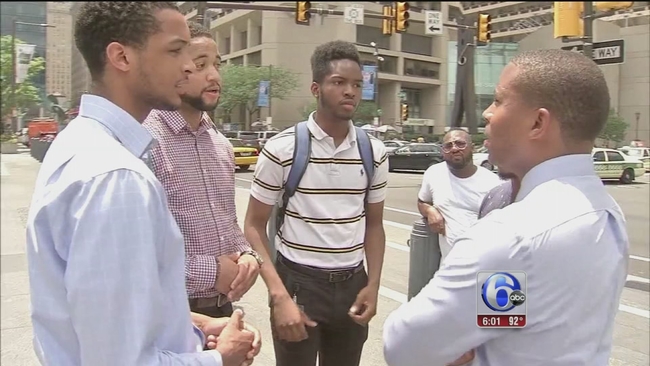