WPVI
SOUTHWEST PHILADELPHIA (WPVI) -- Philadelphia police arrested one teenager and are seeking another for the murder of a 15-year-old boy as he left a basketball game.

Tyhir Barnes was shot in the face near 60th Street and Baltimore Avenue in Southwest Philadelphia on July 11th.

16-year-old Josh Richardson was arrested around 6 a.m. Thursday and charged in the killing.

Police are continuing to search for 16-year-old Kywayne Hill who is considered armed and dangerous.

"Just why? I want answers. Why is the biggest one word question I have. Why?" Tyhir's mother Tanisha Pratt-Thomas told Action News.

Police say Tyhir, 14-year-old Glenn Butler, and a 16-year-old friend were walking home from a basketball game around 10 p.m. that night when shots suddenly rang out.

"This is one of the more senseless homicides," Philadelphia Police Captain James Clark said.

Pratt-Thomas, now preparing to bury her second oldest son, wonders about the 16-year-old who was arrested at his family home.

Philadelphia police say they have one person in custody and are seeking another for the murder of a 15-year-old boy as he left a basketball game. 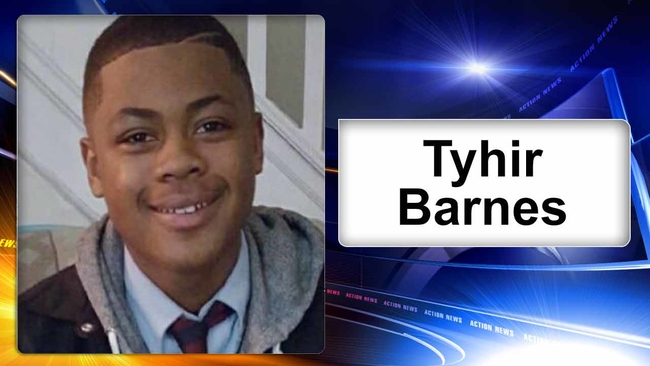