Jaws weighs in on Eagles potential picks ahead of NFL Draft

PHILADELPHIA (WPVI) -- There are a number of NFL Draft prospects who call the Philadelphia area home.

A promise made to a father. A walk-on becoming a team leader. Being awarded the Temple Tough single-digit jersey number. A thank you to a superhero mom.

These are some of the stories of how these young men got this far. 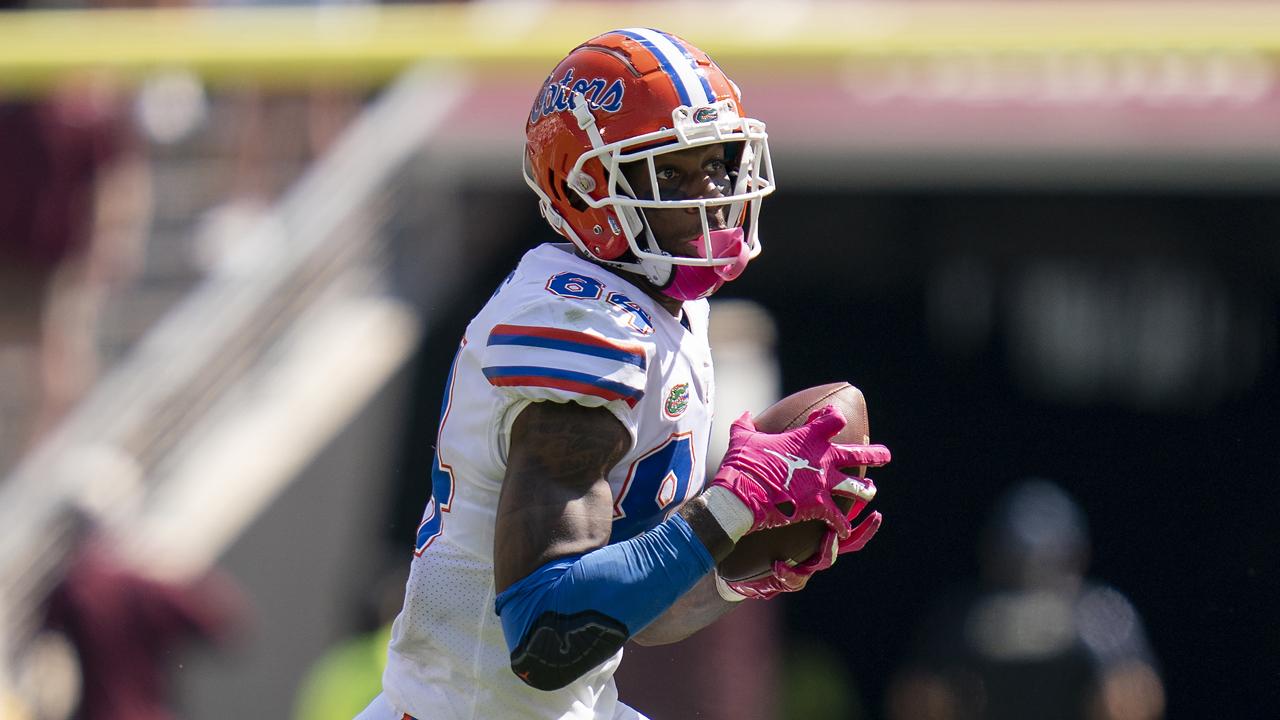 Florida tight end Kyle Pitts (84) runs for yards after a catch against Texas A&M during the second half of a football game, Saturday, Oct. 10, 2020. in College Station, Texas.

Florida tight end Kyle Pitts could make some draft history this week. If Atlanta picks the Philadelphia native at No. 4 overall, he will be highest drafted tight end in the common draft era.

The 6'6, 246 pound receiver, a graduate from Archbishop Wood High School, "will bring positional versatility to an NFL club," ESPN says.

Pitts transferred to Archbishop Wood High School after his sophomore year and moved from quarterback to tight end.

The only time a tight end was picked in the top five came in 1972, when Denver took Riley Odoms fifth overall. Odoms was a two-time All-Pro and four-time Pro Bowler with 396 catches in 12 seasons. 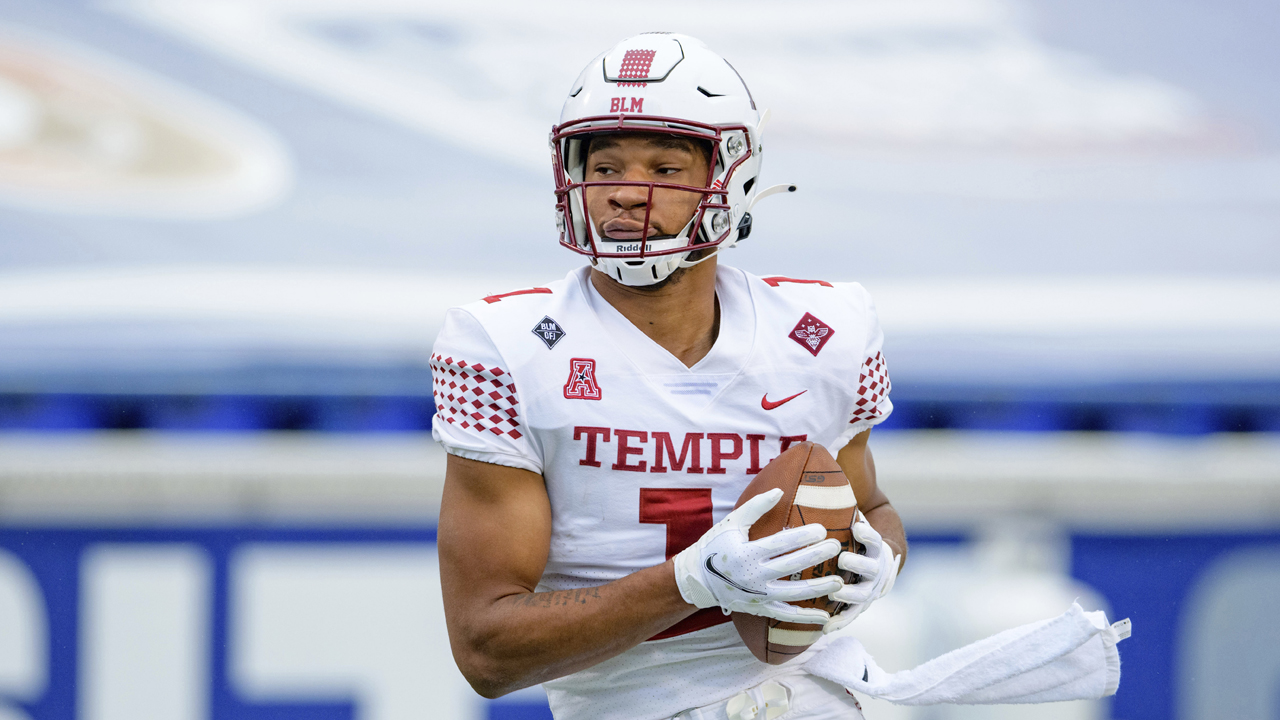 The 6'5, 220-pound Temple University wide receiver scored three touchdowns in his final season, finishing with a total of 15 for his college career. He ended his Temple run with 131 receptions and 1,1819 yards.

In 2019, he was awarded #1 at the beginning of summer practice. Temple awards single-digit jerseys to the toughest players on the team.

The Cheltenham High School grad is now trying to catch on in the NFL, either as a late-round draft pick or an undrafted free agent.

Despite 50 receivers ranked ahead of him, his attitude is still optimistic.

"That just drives me to go harder each and every day. Let's prove them wrong. That's just experts saying that this guy is better than you. I don't believe what they say," said Mack. "I want to be pretty dominant in the NFL. I just don't want to be a regular wide receiver. I want to be dominant."

Mack gets his passion and drive from his father Daryl, who never saw him play at Temple University. He died of a heart attack in the spring of 2017, just months before his college debut.

One of the last things Mack says he told his father was, "Dad, I'm going to make it to the NFL." 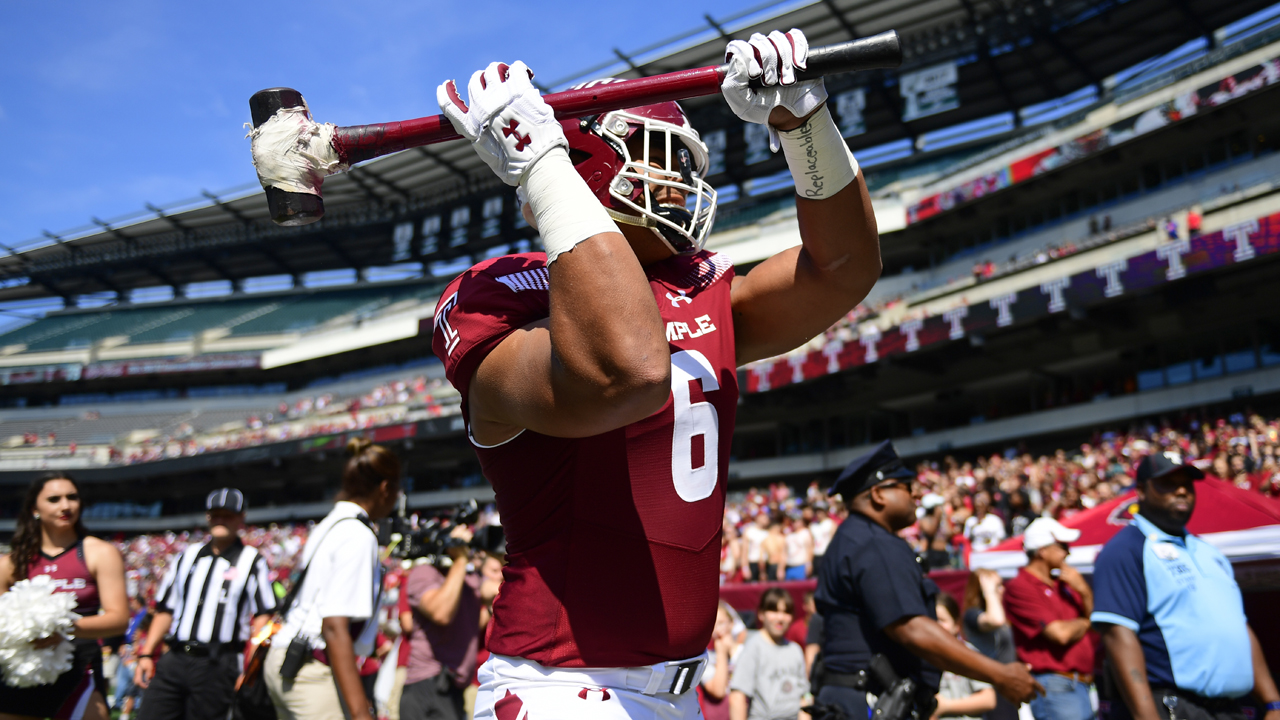 Temple defensive tackle Daniel Archibong (6) prepares to swing the ceremonial sledgehammer before a game at Lincoln Financial Field on Saturday, Aug. 31, 2019 in Philadelphia.

The 6'6, 300-pound Temple defensive tackle Daniel Archibong earned his degree in criminal justice. He someday wants to work in tech for the FBI, but right now his eyes are set on the NFL.

The Springfield High School grad set a new career-high in tackles with six in the season opener at Navy.

In 2019, he was awarded the Temple Tough #6 during summer practices, from his previous #95.

NFL's analysis says Archibong is "first to land hands most of the time." 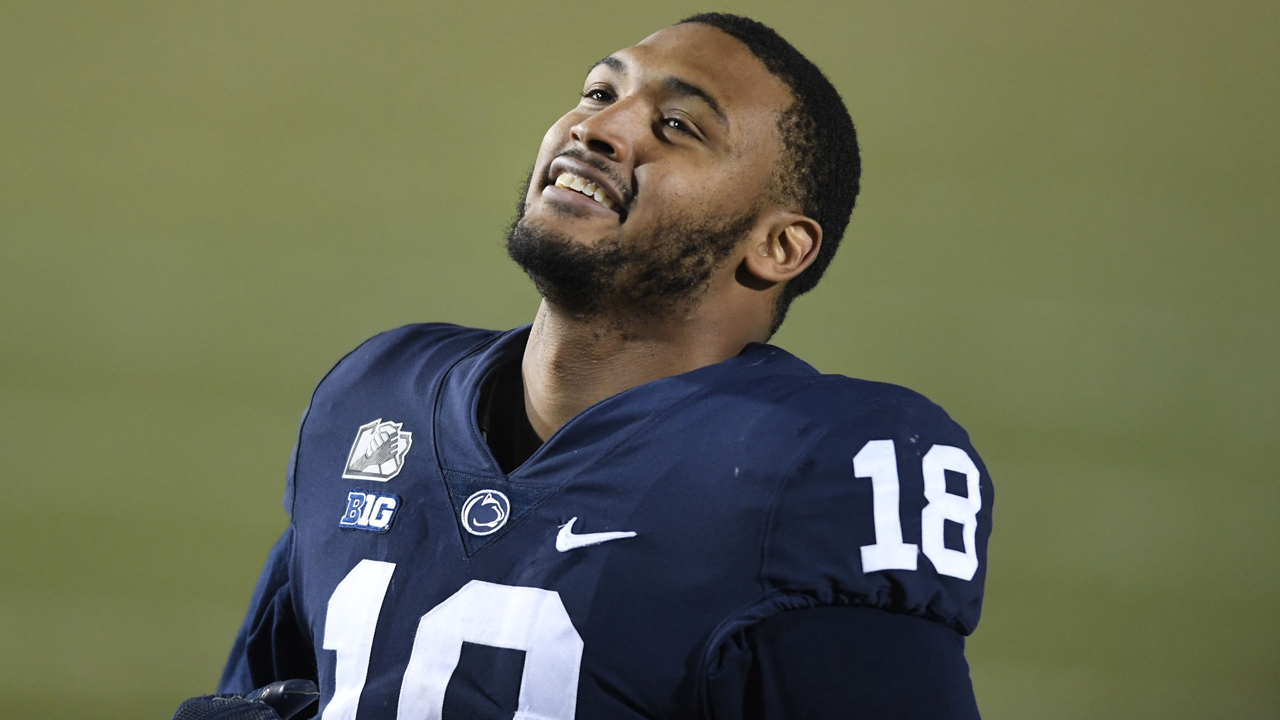 Shaka Toney is proud of where he comes from.

"That Philly demeanor where, you're making it out of here, you've got a certain type of toughness that you're built for no matter what's coming at you in life," Toney said.

He led Imhotep to a state title in his senior year.

"I've done my homework. I've gone up against the best. I just feel, can you put some respect on my name, please? I'm from Philly, I'm built for this," said Toney.

The youngest of five was raised by his mom Debbie, who worked two jobs to provide for the family after his father passed away when he was only 2 years old.

"It was her, night after night, day after day that was there for me and my siblings," Toney recalled. "My mom, that's my superhero, that's my superwoman. She's my mom and my dad, and I can't thank her any more." 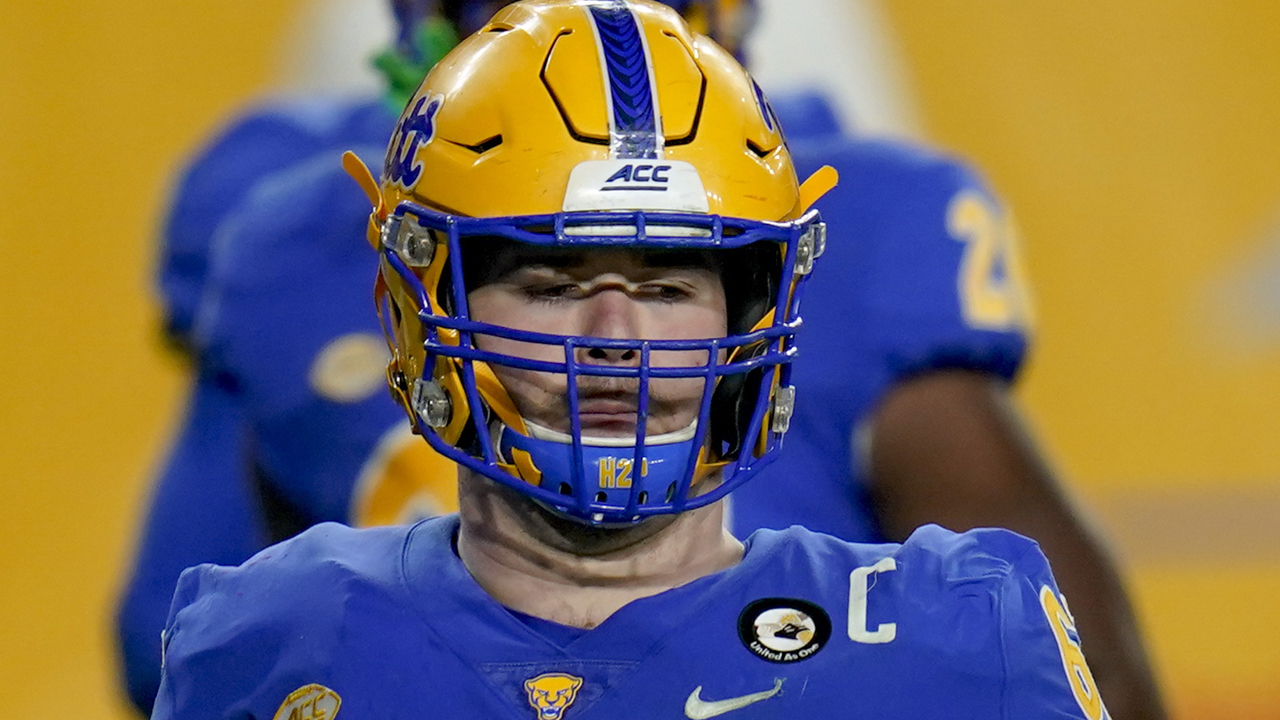 Morrissey began his time in Pittsburgh as a walk-on.

"From walk-on to four-year starter and two-time team captain, Morrissey offers the intelligence and durability teams look for in a center," the NFL analysis says.

The analysis goes on to say Morissey is "praised as teammate and leader."

Morrisey won the 2020 Burlsworth Trophy awarded to the top player to begin career as a walk-on. 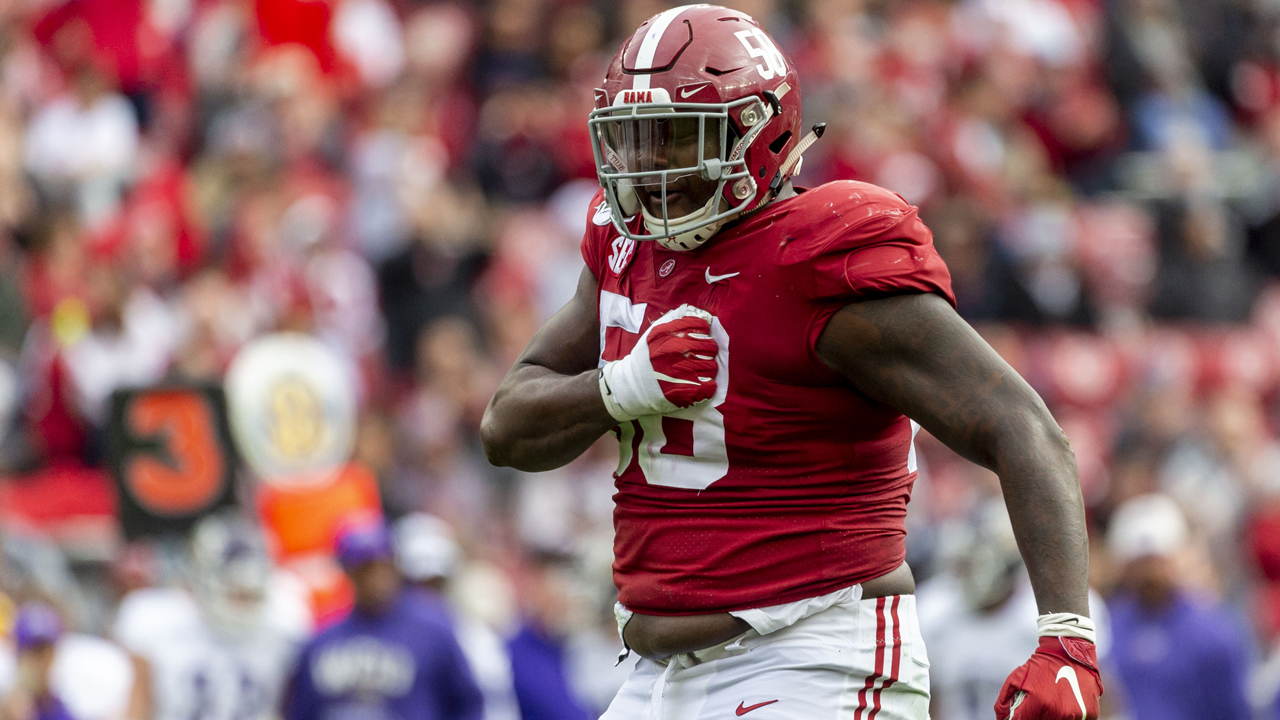 Alabama defensive lineman Christian Barmore (58) celebrates a sack against Western Carolina during the first half of a football game in Tuscaloosa, Ala., Saturday, Nov. 23, 2019.

The 6'4, 310-pound Alabama defensive lineman is among the 13 prospects who will attend the NFL Draft in person.

Barmore will be joined by five members of his national champion teammates including quarterback Mac Jones and Heisman Trophy winner DeVonta Smith. The NFL says an additional 45 prospects will participate virtually.

With the "upfield juice to create disruption, Barmore has the traits to fit as an interior presence in multiple fronts," ESPN says.

The Philadelphia native is a graduate of Neumann Goretti High School. He ranked among the top five defensive tackles and top 100 overall prospects in the country when he finished high school.

The NFL analysis on Barmore says, "His hands and feet sing in harmony and allow him to stay active and free from attempts to sustain blocks against him."

"Barmore's explosive first step, violent hands and upper-body power are the ingredients of a three-down defender with the versatility to play a number of positions in an even or odd front as an impactful rookie starter."