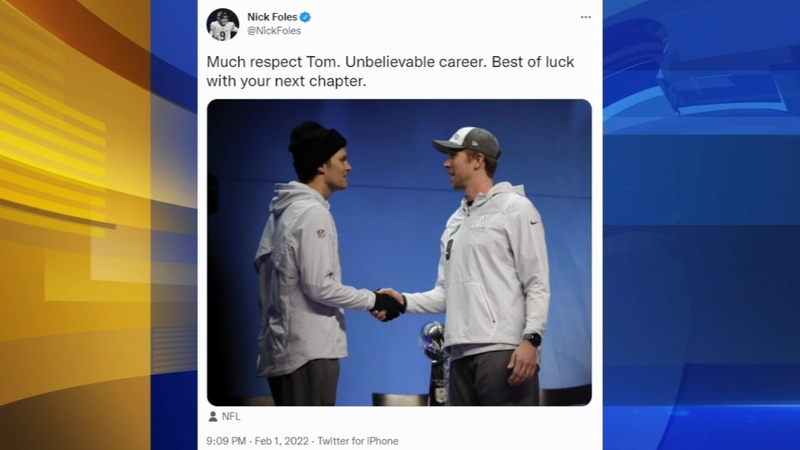 The 44-year-old quarterback ends a legendary career that spanned three different decades on the path from Foxborough to Tampa to Canton. His list of accomplishments is long, and it includes collecting the most championship wins by a single player in NFL history. And don't forget his career records of most touchdown passes (624) and most passing yards (84,250).

Upon hearing the news, athletes across the globe took to social media to congratulate the GOAT on his storied career, including former Philadelphia Eagles quarterback Nick Foles.

Foles was also the Super Bowl MVP when the Eagles defeated Brady and the Patriots in 2018.

One of the questions from that memorable game still lingers in the minds of Eagles fans: why didn't Brady shake Foles' hand after the Patriots' 41-33 Super Bowl loss?

The postgame snub actually came up days before Brady and the Bucs prepared to host the Eagles in the wild-card round.

The game marked Brady's first postseason game against the Eagles since Super Bowl LII, although he had played them two other times during the regular season since, including a 28-22 victory by the Bucs in Philadelphia in Week 6 of this season.

"Are you aware of Eagles' fans fixation with you not shaking Foles' hand?" one reporter asked.


Indeed that is the case, as Foles tweeted one of those handshakes in his message to Brady.

"Much respect Tom. Unbelievable career. Best of luck with your next chapter," Foles said.

Much respect Tom. Unbelievable career. Best of luck with your next chapter. pic.twitter.com/uKDv5Eax9S

During that press conference last month, Brady quickly acknowledged the perception some might have of his competitiveness.

While Eagles fans might never let Brady off the hook, coach Nick Sirianni had high praise for the seven-time Super Bowl winner.

Brady and the Bucs went on to defeat the Eagles 31-15 before being eliminated from the playoffs the following week.