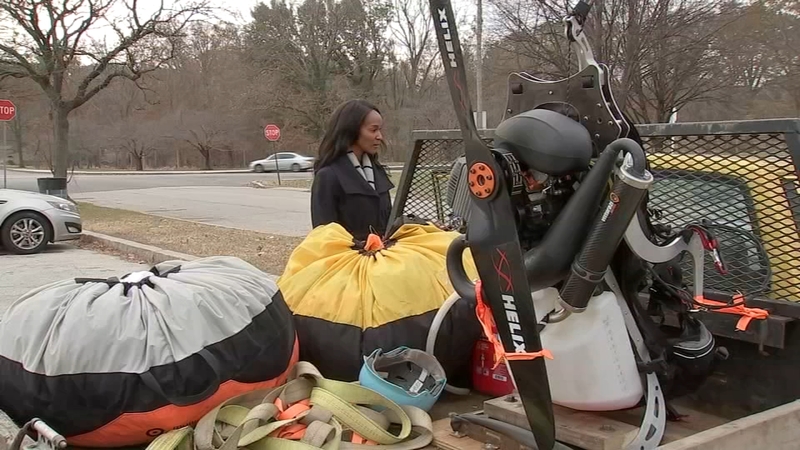 But this Tuesday morning, passers-by spotted something that made them panic and eventually brought out an anti-terrorism task force.

Drivers called police reporting that a person was parachuting from the sky, presumably from a plane that had trouble.

As it turns out, it was just an aircraft enthusiast enjoying a ride over the park in an unusual piece of equipment.

"It's like having your own personal elevator," said Matt Gilbert, the man who was flying in the homemade paramotor.

Paramotors strap onto the back like a backpack and feature a propeller. The parachutes are attached. They don't require a pilot's license.

Gilbert, who built his paramotor himself, says they're not very fast... perhaps even slower than a drone.

He'd taken off and landed by gliding to the ground a few times Tuesday morning before the police showed up.

"I'd launch. It takes about 100 feet or so for me to go airborne," he said "Circle around the park and fly down."

He estimates his landing was at a speed of about three miles per hour. But drivers who saw him coming down assumed something was wrong and called police.

"Everybody thought somebody was falling out of the sky, and there was debris falling from the heavens." Gilbert said. "They thought it was some sort of plane wreck and somebody was parachuting down."

Philadelphia police investigated along with the FAA and an anti-terrorism task force.

Gilbert, who lives in both Southwest Philadelphia and Florida, says the authorities all determined that he hadn't broken any laws.

As for whether he'll do it again, he says "yes."

But he'll likely choose a place with fewer people around so he doesn't cause a panic.

"The idea that somebody is genuinely panicked that someone is falling out of the sky under duress is an experience that I don't want strangers to have on my account," he said.

Even with all the attention and the police investigation, the professional metal worker is able to see the bright side.