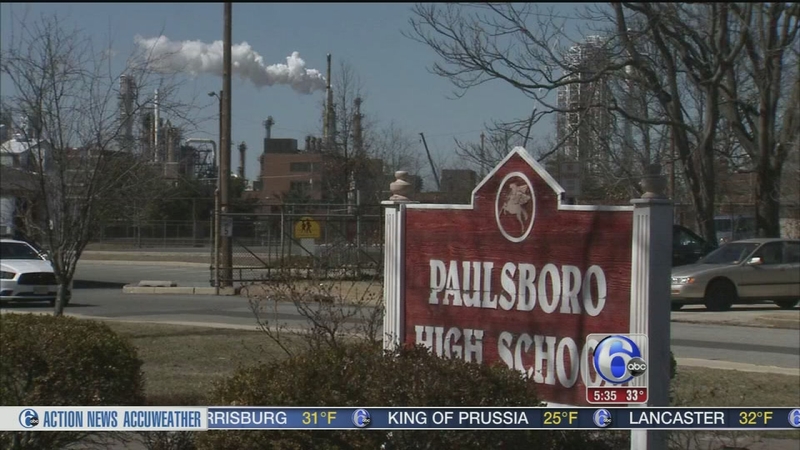 Students and staff had smelled a foul odor at Paulsboro High School all week. Then Wednesday morning, some started to feel sick.

Teacher Rosie Lombard explains, "The kids that I saw were putting their heads down, headaches, stomach aches from the smell."

More than a dozen students and two staff members were transported to Inspira Medical Center in Woodbury for observation. Most were treated and released.

Their parents rushed to be with them.

One of those parents, Tara Fortson, tells us, "She told me that her nose is burning. She has headaches. She told me, she's just like dizzy. She doesn't feel well at all and her eyes were burning."

The Paulsboro Police Department issued the following statement to residents on Tuesday:

The Paulsboro Refining Company is aware of an ongoing odor issue in the community. The issue is coming from their tank farm. The company is working on strategies to eliminate the odor and will update as necessary. Residents may experience some nuisance odors and as a result, the company will have trained personnel in the community to conduct periodic air monitoring. They apologize for the inconvenience and are working to correct the problem. The police department, along with the local OEM and fire department, will continue monitoring the situation to ensure the safety of our residents and our community.

The school sits adjacent to the Paulsboro Refining Company. A spokesperson told Action News that on Monday morning a vapor leak was detected in a tank containing partially refined oil called NAPTHA.

Efforts were underway to drain that tank and thorough air quality testing was being done. A refinery spokesperson said at no point were any hydrocarbons detected.

When students started feeling ill this morning, the Office of Emergency Management and the refinery came out to test air quality at the school again.

Paulsboro Schools Superintendent Walter Quint says, "As soon as the emergency management people said, 'there are sustained levels and we think it would be better that students and staff weren't in the building,' we closed."

The school was aired out and the building was deemed safe again by the afternoon.

The refinery is cleaning the leaky tank and the hope is the foul smell will dissipate by morning.

Quint says, "The problem should be at an end, but we'll monitor the building again tomorrow morning and then make a decision. If there are detectable, sustained levels of any dangerous chemicals we won't open up."