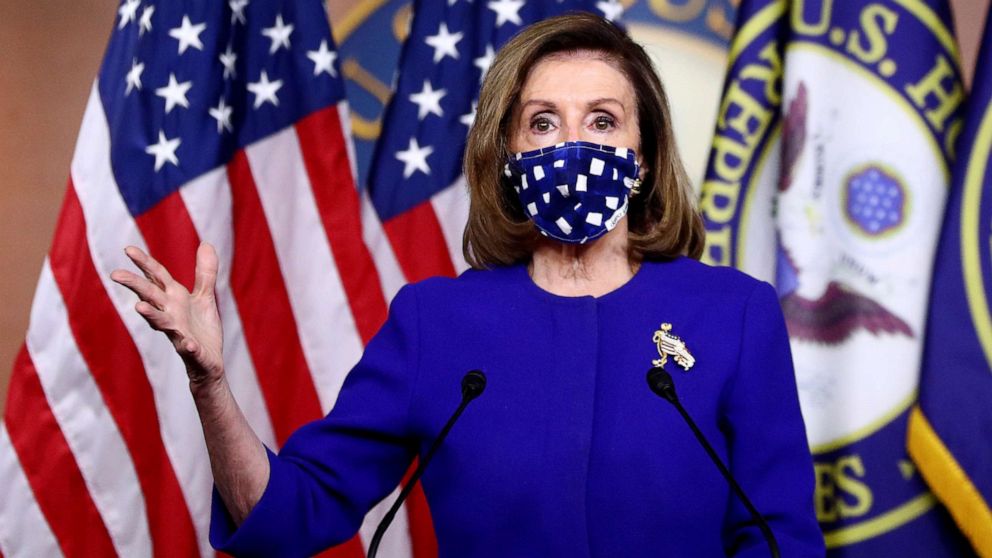 Director of National Intelligence John Ratcliffe and FBI Director Christopher Wray held a surprise press conference Wednesday night to announce the foreign interference, including news of threatening emails purporting to be from the alt-right group the Proud Boys, who have denied any involvement.

"I think we have to be very careful about any statements coming out about the election from the intelligence community at this time," Pelosi said.

House Intelligence Committee Chairman Adam Schiff said that he doesn't question the actions, but is wary of some who get information from overseas.

"I don't have any reason to question that Iran is involved in the two actions identified by the intelligence community and that Russia continues through a variety of platforms to seek to interfere in this election through cutouts, through the laundering of information, through willing members of Congress, through overt media and covert media. It's definitely a situation of voters beware," Schiff told MSNBC on Thursday.

David Cicilline, D-R.I., a member of the House Judiciary Committee, told ABC News he has great confidence in the director of the FBI.

"I have less confidence in the director of national intelligence, who made it clear that he believes he serves the interests of the president," Cicilline, who is running for assistant speaker of the House, said. "I don't think there's any question that foreign adversaries, principally Russia and now some activity by the Iranians, is underway to try to corrupt the American presidential election. I don't think there's any question about that."

But not all Democrats agree.

Sen. Mark Warner, the top Democrat on the Intelligence Committee, who has been briefed twice on the recent attacks, told reporters, "I understand Director Ratcliffe made the comments he made," adding that he thought "it was appropriate that the leadership of the community came forward and raised this issue about Iran."

"I think it's a legitimate issue, but I think it's also important that they continue to point out the ongoing threats they face from Russia as well," Warner added.

Warner, like Pelosi and Schiff, said he wants to know more about the attack.

"I've not seen all of the underlying intelligence. I still would like to -- hope to -- see that," said Warner.

But Warner said he wants the intelligence community to address election interference efforts more fully, and he wants daily briefings on the threat leading up to Election Day.

"What I'd like to hear more from the intelligence community is not necessarily the circumstances around Iran, which are critically important, but past comments from the IC about Russian 'disinformation campaigns,'" Warner said.

Some Republicans said Thursday that the threatening emails that purported to be from Proud Boys were designed to hurt President Donald Trump.

Lankford was among those who said Iran should be sanctioned, as Russians have been, a move the Trump administration took later Thursday afternoon.

The Treasury Department announced it is sanctioning five Iranian entities for interfering in the 2020 presidential election, including Iran's Islamic Revolutionary Guard Corps and its elite branch the Quds Force -- both of which have long been under several U.S. sanctions.

But the new sanctions also include the IRTVU and IUVM, two Quds Force-owned propaganda outlets, as well as Bayan Rasaneh Gostar Institute, which the Treasury Department said is a front company for the Quds Force.

"As I've said before, Vladimir Putin is not a friend to the United States," McCaul, who serves as the ranking member on the House Foreign Affairs Committee said. "And while disturbing, it's no surprise that in addition to Russia, foreign adversaries like Iran and China are attempting to undermine our democratic institutions."

"This most recent incident reminds us that we must do all we can to ensure the integrity of our election," McCaul said. "Going forward, we must remain vigilant against efforts to sow discord and send a clear message to those responsible: the United States will not tolerate it."

According to the sources, who had both been briefed on the intelligence, the security breaches went beyond data from publicly available sources, which was also obtained.

The targeting and weaponization of voter registration information remains an ongoing threat and there are concerns that both countries may try to sow more discord and disinformation to American voters.

The sources declined to say which jurisdictions and how many voters were involved.

In Florida, where the threatening emails targeting Democrats originated, the secretary of state's office told ABC News there was no breach.

"There has been no breach to Florida's Voter Registration database. Information provided in submission of a Florida Voter's Registration," Mark Ard, the communications director for Florida Secretary of State Laurel Lee, said, adding that voter information is publicly accessible.

Multiple states have said that their voting systems were not compromised.

In a video released on Twitter by Ohio Secretary of State Frank LaRose, he said that federal partners informed election officials about the incident, although the timing is unknown. He assured Ohio voters it did not effect them.

"First of all, this did not impact Ohio, but of course, we're working with our federal counterparts monitoring the situation," LaRose said. "We've been in close conversation with them. I really appreciate the work that DHS and FBI have done on this and the fact that they have been forward leaning and making sure that that states all over the nation and our states, elections officials throughout the nation, have been kept apprized of the situation."

In another battleground state, Wisconsin Elections Commission Administrator Meagan Wolfe said that there was no evidence that their voter registration system was hacked.

"Any data that was used to make these email contacts is publicly available," Wolfe said at a press conference. "This is not data that came from statewide databases. So yesterday's announcement, I think the most important thing is it serves as a reminder to all of us as we head into the election, and that is to seek out trusted sources of election information."