6abc Loves the Arts: Penn Museum's 'Cultures in the Crossfire' 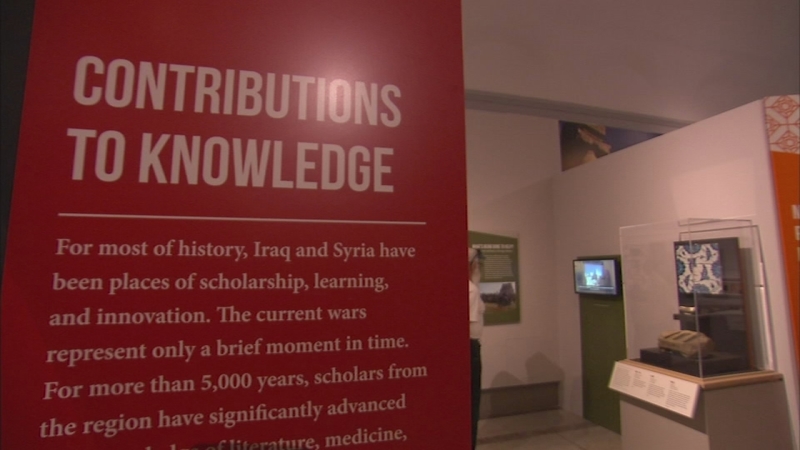 6abc Loves the Arts: Penn Museum's 'Cultures in the Crossfire'

The Penn Museum is putting a spotlight on cultures in the crossfire with an exhibition focused on war-torn regions in the Middle East.

Cultures in the Crossfire: Stories from Syria and Iraq explores the heritage, diversity, and achievements in those countries, while also highlighting the museum's work to aid refugees and rescue cultural treasures at risk of being destroyed.

The exhibition is divided into themes that explore identity, daily life and the movement of people.

"We have a whole medley of things on display, from a rattle which is 6,000 years old," says Penn Museum Associate Curator Lauren Ristvet. "We also have some sort of amazing platters that would have been used for feasts."

Another theme focuses on scholarship.

"Because basically writing was invented in Iraq; the alphabet is basically invented along the Syrian coast," explains Ristvet, who says the exhibition includes books on music as well. "We also have some evidence of early writing, including stamps."

There are artworks installed throughout by Syrian-born artist Issam Kourbaj. A video installation at the exhibition entrance reflects on the air strikes in Syria; lost is the artist's commentary on the refugee children who drowned while trying to enter Greece in 2015.

"It's basically clothing from Syrian children that he's made as sort of grave tombstones for them," says Ristvet.

The Penn Museum has been excavating in the Middle East since the 19th century and you can learn about that work in the adjacent Artifact Lab.

"You can actually go and see conservators at work," says Ristvet. "We also wanted to give people a sense of what was being destroyed, what the cultures of this area were."

Cultures in the Crossfire: Stories from Syria and Iraq is on display at the Penn Museum through November 26th.