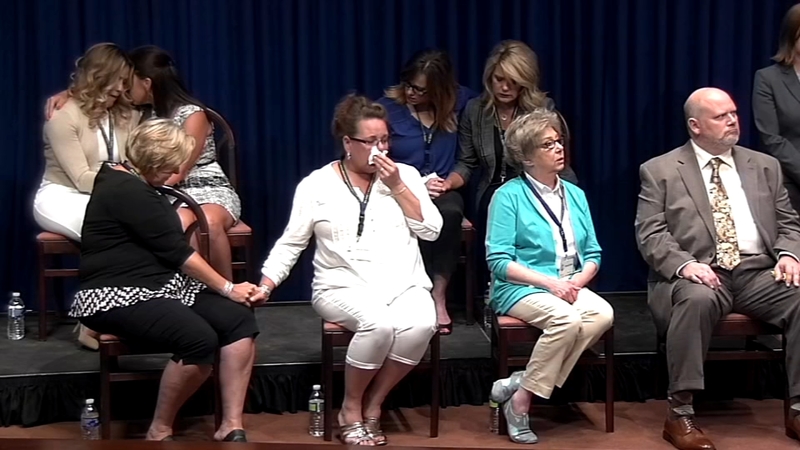 HARRISBURG, Pa. -- A priest raped a 7-year-old girl while he was visiting her in the hospital after she'd had her tonsils removed. Another priest forced a 9-year-old boy into having oral sex, then rinsed out the boy's mouth with holy water. One boy was forced to say confession to the priest who sexually abused him.

Those children are among the victims of roughly 300 Roman Catholic priests in Pennsylvania who molested more than 1,000 children - and possibly many more - since the 1940s, according to a sweeping state grand jury report released Tuesday that accused senior church officials, including a clergyman who is now the archbishop of Washington, D.C., of systematically covering up complaints.

The "real number" of abused children and abusive priests might be higher since some secret church records were lost and some victims never came forward, the grand jury said.

U.S. bishops adopted widespread reforms in 2002 when clergy abuse became a national crisis for the church, including stricter requirements for reporting accusations to law enforcement and a streamlined process for removing clerics who abuse children. But the grand jury said more changes are needed.

"Despite some institutional reform, individual leaders of the church have largely escaped public accountability," the grand jury wrote in the roughly 900-page report. "Priests were raping little boys and girls, and the men of God who were responsible for them not only did nothing; they hid it all."

Top church officials have mostly been protected and many, including some named in the report, have been promoted, the grand jury said, concluding that "it is too early to close the book on the Catholic Church sex scandal."

In nearly every case, prosecutors found that the statute of limitations has run out, meaning that criminal charges cannot be filed. More than 100 of the priests are dead. Many others are retired or have been dismissed from the priesthood or put on leave. Authorities charged just two as a result of the grand jury investigation, including a priest who has since pleaded guilty, though some of those named had been charged years ago.

The investigation of six of Pennsylvania's eight dioceses- Allentown, Erie, Greensburg, Harrisburg, Pittsburgh and Scranton - is the most extensive investigation of Catholic clergy abuse by any state, according to victim advocates. The dioceses represent about 1.7 million Catholics.

Until now, there have been just nine investigations by a prosecutor or grand jury of a Catholic diocese or archdiocese in the United States, according to the Massachusetts-based research and advocacy organization, BishopAccountability.org.

The Philadelphia archdiocese and the Johnstown-Altoona diocese were not included in the investigation because they have been the subject of three previous scathing grand jury investigations.

The grand jury heard from dozens of witnesses and reviewed more than a half-million pages of internal diocesan documents, including reports by bishops to Vatican officials disclosing the details of abusive priests that they had not made public or reported to law enforcement.

The panel concluded that a succession of Catholic bishops and other diocesan leaders tried to shield the church from bad publicity and financial liability. They failed to report accused clergy to police, used confidentiality agreements to silence victims and sent abusive priests to so-called "treatment facilities," which "laundered" the priests and "permitted hundreds of known offenders to return to ministry," the report said.

The conspiracy of silence extended beyond church grounds: police or prosecutors sometimes did not investigate allegations out of deference to church officials or brushed off complaints as outside the statute of limitations, the grand jury said.

Diocese leaders responded Tuesday by expressing sorrow for the victims, stressing how they've changed and unveiling, for the first time, a list of priests accused of sexual misconduct.

James VanSickle of Pittsburgh, who testified he was sexually attacked in 1981 by a priest in the Erie Diocese, called the report's release "a major victory to get our voice out there, to get our stories told."

The report is still the subject of an ongoing legal battle, with redactions shielding the identities of some current and former clergy named in the report while the state Supreme Court weighs their arguments that its wrongful accusations against them violates their constitutional rights. It also is expected to spark another fight by victim advocates to win changes in state law that lawmakers have resisted.

Its findings echoed many earlier church investigations around the country, describing widespread sexual abuse and church officials' concealment of it. U.S. bishops have acknowledged that more than 17,000 people nationwide have reported being molested by priests and others in the church going back to 1950.

The report comes at a time of fresh scandal at the highest levels of the U.S. Catholic Church. Pope Francis last month stripped 88-year-old Cardinal Theodore McCarrick of his title amid allegations that McCarrick had for years sexually abused boys and committed sexual misconduct with adult seminarians.

One senior American church official named in the grand jury report is Cardinal Donald Wuerl, who leads the Washington archdiocese, for allegedly helping to protect abusive priests when he was Pittsburgh's bishop. Wuerl, who was bishop of the Pittsburgh diocese from 1988 to 2006, disputed the allegations.

Terry McKiernan of BishopAccountability.org said the report did a good job of highlighting the two crimes of church sex abuse scandals: the abuse of a child and the cover-up by church officials that allows the abuse to continue.

"One thing this is going to do is put pressure on prosecutors elsewhere to take a look at what's going on in their neck of the woods," McKiernan said.