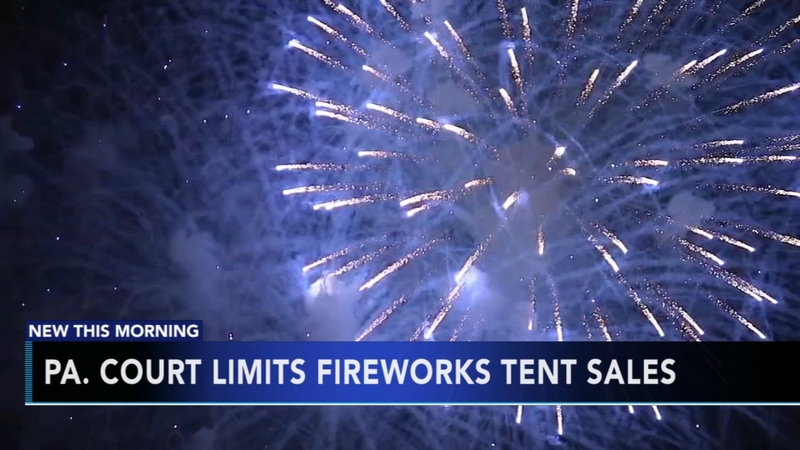 HARRISBURG, Pa. -- A court Tuesday narrowed a year-old state law that allows Pennsylvania residents to buy and use more powerful airborne fireworks, throwing out the part that permitted such sales from roadside tents.

Commonwealth Court ruled that lawmakers improperly delegated their authority by imposing safety standards set by an outside group, in violation of the state constitution.

The judges invalidated the portion of the law that addressed sales from roadside tents and similar temporary structures, but left intact the rest of the law.

That means sales of Roman candles, bottle rockets and other airborne fireworks will continue at the state's roughly 80 brick-and-mortar fireworks stores.

Display-grade fireworks are still limited to permitted operators, and some devices remain illegal under federal law, including M-80s and quarter- and half-sticks.

The lawsuit by groups of brick-and-mortar fireworks retailers against the governor, cabinet officials and legislative leaders sought to have the entire law thrown out.

Dan Peart, government affairs director for Youngstown, Ohio-based Phantom Fireworks, who helped bring the lawsuit, said there are no plans to appeal at this time.

"You will see a vast expansion now, with the brick and mortar facilities," Peart said, predicting the tax revenue will increase as their sales grow.

"The General Assembly provided no policy statement or other limiting parameters, leaving the NFPA free to create, alter or remove, as frequently or infrequently as it chooses, any standard it chooses concerning temporary structures used to sell fireworks," wrote Judge Robert Simpson.

In fact, the NFPA regulations do not currently address retail storage and sale of consumer fireworks, as Simpson's opinion noted.

Peart said state officials have estimated about 300 temporary retail fireworks dealers were licensed in the past year.

Retailers will be allowed to sell fireworks from tents under the new court decision, but they will be limited to the less powerful, ground-based products, Peart said.