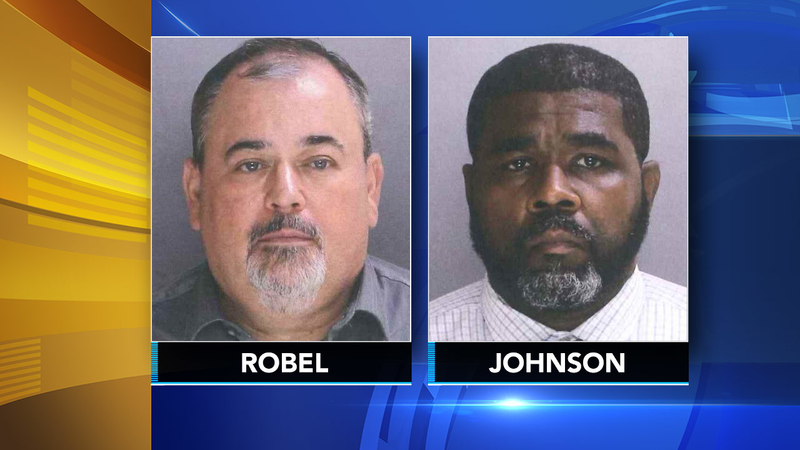 The suspects were identified as 58-year-old Michael Robel of Shamokin, Pa. and 47-year-old Kareem Johnson of Coatesville, Pa.

Authorities say in January, just after a sinkhole opened up in a backyard - two state constables misused their authority while working as private security here on Lisa Drive in West Whiteland Twp.
Charles Gaza, Chief of Staff for the Chester County District Attorney, explained, "Any time they're using their official capacity - their badge, their title - for their own private pecuniary benefit, that's when they start running afoul of the ethics laws, what's called official oppression."

Authorities say the men were contracted by a Harrisburg-based company and asked to provide copies of their state constable certification cards and firearm cards as a condition of employment.

"They were hired to work security for the Mariner East Pipeline. If they were doing that in their private capacity as citizens, like a security guard, they would be allowed to do that," said Gaza.

Authorities say the men also didn't report their earnings as required by the Pennsylvania ethics act.
Sunoco, the company constructing the pipeline, released a statement in response:

"Constables Johnson and Robel were not Sunoco or Energy Transfer employees. They were employed by Raven Knights, who provided security services and personnel. We have a code of conduct for all of the contractors and third-party vendors that clearly states what are acceptable behaviors and business practices, and we expect our contractors and their employees to adhere to that."

We spoke with someone with Raven Knights, LLC who didn't want to comment, and then referred Action News to an attorney.

Robel and Johnson were charged Thursday and released on unsecured bail. Both still hold their elected position of constable.