Art of Aging: Soup Squad contributes to Meals on Wheels 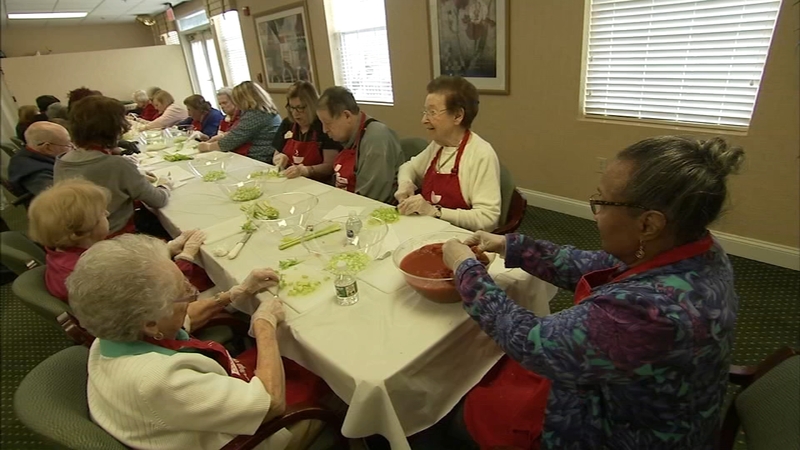 Art of Aging: Soup Squad contributes to Meals on Wheels

DRESHER, Pa. (WPVI) -- A group of residents known as the "Soup Squad" at Brandywine Living at Dresher Estates are contributing to the Meals on Wheels associated program, "Cook for a Friend."

The program creates soups made fresh and delivered the next day to area residents in need.

Every month about 20 seniors at Brandywine Living at Dresher Estates take to their cutting boards to prepare 64 quarts of soup.

John Eskate, Director of Community Services, KleinLife said, "So cook for a friend is one of the programs of KleinLife.

Escapades Producer, Brandywine Living at Dresher Estates, Rachel Kaufman Schatz, is the one who organized the soup squad after she learned the program was looking for volunteers.

Kaufman Schatz said, "And there's something about sitting around the table and chopping vegetables and being together."

Three generations of the Kaufman Schatz' family have been involved with Cook for a Friend, including her mother-in-law Barbara Lipsen.

"We always like to put lots of guts in our soup and lots of love," added Kaufman Schatz.

"Anytime we can give back to the community it makes us feel good that we're doing something productive," said Barbara Miller Schatz Lipsen, resident, Brandywine Living at Dresher Estates.

"It's a nice thing to do. We all have to give back somehow or other," she said.

"It's been a really great partnership. They just make the best soup," said Eskate.

"We all sort of work together. They help me and then I can sit there and chop and dice," said Kaufman.

The Dresher Soup Squad feels like a family coming together to help make a difference for other seniors with food insecurity.

Kaufman added, "That there are people that are caring enough to make something."