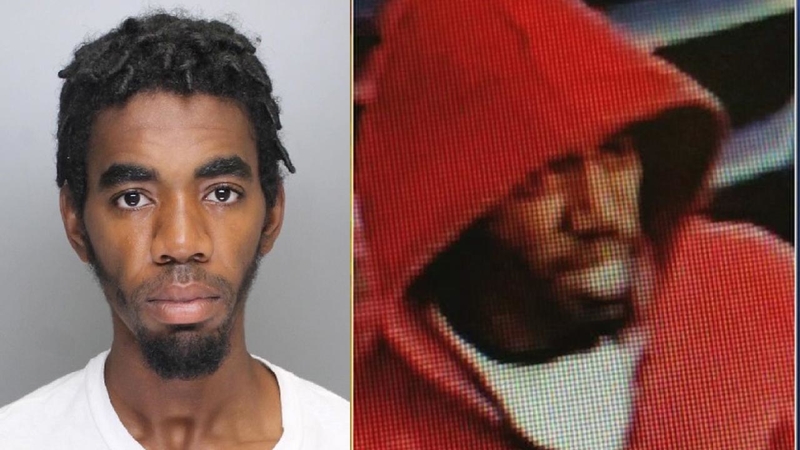 HAVERFORD TWP., Pa. (WPVI) -- Police have identified the man wanted for a killing in Haverford Township, Delaware County that followed a burst of gunfire in the Overbrook Park section of Philadelphia.

Derrick Rollins, 24, is on the run, police say. He has addresses in the 5100 block of Locust Street and the 4000 block of North A Street.

Police say Rollins is considered to be "armed and extremely dangerous."

This comes just hours after police recovered a gray Volvo in the 5100 block of Locust Street in West Philadelphia. That vehicle is believed to be Rollins' car, and was linked to the shootings.

The Action Cam was there as the Volvo was towed away by police.

Police say they found the vehicle after a witness saw the driver speeding and was able to get a partial license plate.

Investigators said officers tried to take Rollins into custody at a home on Tuesday morning, but he was not there.

At a National Night Out event in Havertown Tuesday night, officials fielded questions.

According to police, a witness in Overbrook Park saw a man in a red hooded sweatshirt, identified as Rollins, get out of Volvo and walk up to a neighbor's window and peer inside. That witness called his neighbor and made him aware of the situation.

Rollins left the area so, police say, the witness and the neighbor got into a car and went looking for the Volvo.

Police say they found the car, and the driver, at 77th and Sherwood and the homeowner confronted him. It led to an argument, and Rollins allegedly pulled out a gun and fired 17 shots at the two men. They flee the area, leaving the city and enter Haverford Township.

Then, around 6 p.m., 29-year-old John Le was shot at an apartment complex in the 2300 block of Haverford Road in Haverford Township. He was there visiting a friend, police said.

Officers arrived on the scene to find a friend performing CPR on Le, and medics rushed him to the hospital where he was pronounced dead.

Police have a clear image of the man wanted in connection with the deadly shooting, identified as Rollins, who was caught on video running away from the scene after the crime, heading northbound up Haverford Road towards Wynnewood.

The video shows Le leaving a pizza shop after picking up an order. When he exits, the man identified as Rollins is seen walking several feet ahead of him.

Investigators don't know what happened after the man and Le walked out of the view of the surveillance cameras.

"We don't know what transpired, but it's very short and the sidewalk leading up to the apartment is not very long. There was some sort of confrontation. Was it a robbery? We don't know that yet," Viola told Action News this week.

Family members of John Le did not want to go on camera, but describe him as gentle, kind and hardworking. The Temple grad had just landed a new job as an accountant.

Several times a week after work, Le could be found at Fairmount Park's Sedgley Woods disc golf course.
Those who know him say he loved the fresh air and the competition.