Man, 20, rides school bus, gets into Wissahickon High School after night of drinking 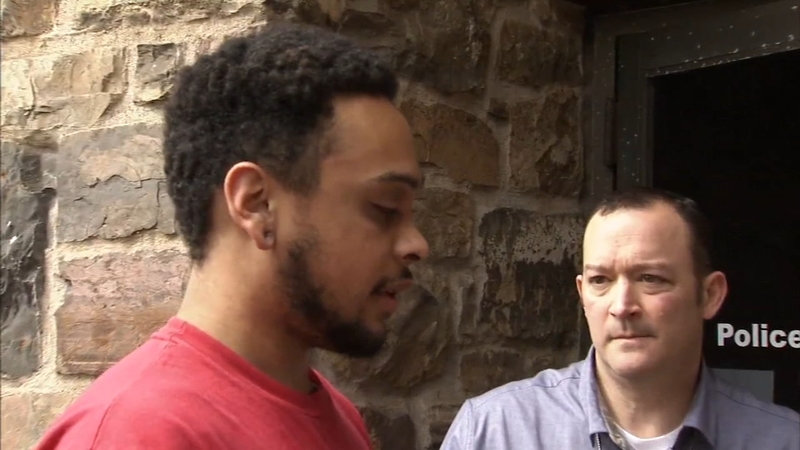 According to Lower Gwynedd police, Dominic Herder started to walk home on Friday morning after a long night of drinking at a party in the Springhouse neighborhood.

Police say Herder saw a Wissahickon School bus while he was walking. He reportedly decided the school was closer to his home than his current location, so he got on board.

Sophomore Sasha Jason saw him and says he was acting strangely.

Jason said he was, "Rapping a song or something."

Police say when they approached Herder, he ran out of the building and then someone pulled the alarm.

He was quickly apprehended.

The building was evacuated, but no students were injured.

In his first court appearance, Herder admitted he had a drinking problem.

He also told Action News he was sorry for scaring everyone at the school and that he didn't mean to harm anyone.

"I apologize. I was being stupid and not thinking. I do apologize to everybody and their family and their parents for scaring everybody," Herder said. "There's no harm meant."

If you are wondering how the incident at Wissahickon High School happened today here is the school district’s account. @6abc pic.twitter.com/lkrJ6D0gk1

He was released and will remain out of county jail as long as he meets the bail requirements, including attending treatment for his drinking problem.

His next court appearance is April 2.

The school district sent the following statement, describing the incident and what officials plan to do going forward:

The following set of facts is a follow-up to the original statement this morning regarding today's intruder incident at WHS.

The perpetrator is not a current or former WHS student. As a 20 year old, he LOOKED and dressed like a high school student, which is how he gained access to the building (see below). He was found to be intoxicated when apprehended by the police, and has since been charged with Criminal Trespass and Disorderly Conduct (among other things). Police interviews concluded he never had any intention of harming anybody-in his state, he was confused and just trying to get home after a late night party at a nearby private home went into the morning hours, thinking "Wissahickon" was closer to his home (he does not live in the district). A search of his phone confirmed multiple texts that were intended to get him home. Nothing else. No weapons or contraband were found on his person.

He arrived at WHS in the morning on a school bus, which he boarded at a normal bus stop. Bus drivers are instructed to watch oncoming traffic while students are boarding, to ensure vehicles obey crosswalk and flashing light rules. This does not obviate the fact that he should have never been allowed to board a bus-it just explains how it happened. The bus driver is a regular driver, with a history of only positive performance reviews.

Entry to WHS is now restricted in the early morning hours (before buses arrive) to three specific entrances, which are all monitored by an adult employee. However, when buses arrive, the large number of students entering at once makes the screening of every person entering the building a practical impossibility. The perpetrator entered in a large group, all at once, with many other students, and looking like a student, did not attract any undue attention.

WHS students noticed him on the bus, and upon entering WHS, they immediately reported him to Officer Beth Sanborn from the Lower Gwynedd Police Department, who is our on-site School Resource Officer, which initiated the emergency response that concluded with his apprehension (after a brief foot chase). Once again, our students are to be commended for saying something once they saw something.

At this time, the police and building administration made an immediate assessment of the facts. The building was evacuated so that we could be sure he did not do anything while in the building to cause harm. Security tapes were scrutinized, and once we were confident the building was safe, staff and students were called back in. The evacuation was first announced to staff members via our RUVNA internal communication system, and then the fire alarm was activated. Neither of those things were done until the person was apprehended. It is standard practice to have the fire company alerted in a situation like this, in case there was something found that needed immediate attention (having them onsite saves valuable time-thankfully, that they were not needed today, but they were involved just to be sure).

Moving forward, the district will do the following:

1. Conduct a full debrief of the incident with school personnel, transportation personnel, county school security liaisons and the LG Police Department.
2. Research possible solutions to the bus entry piece, such as a bus pass system or possibly picture ID/swipe functionality.
3. Research possible solutions to the building entry piece, such as a picture ID/swipe system.

In closing, we do not want to over-react to an isolated situation, but we also want to learn from this and implement any changes to procedures that may make sense. If any changes are recommended, they will be communicated to the entire WHS community promptly and comprehensively.