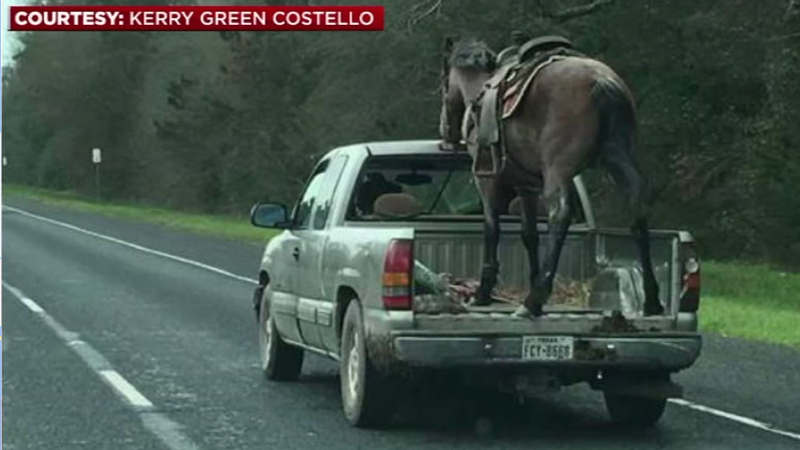 CORRIGAN, Texas (WPVI) -- Police say a man who drove with a horse in the bed of his pickup truck may face animal cruelty charges.

KTRK-TV reports, the video of him driving 70 miles per hour on US-59 in Corrigan, Texas has a lot of people talking.

Driver Ami Parbs caught video of the horse as she drove through Corrigan.

The Corrigan Police department says the unidentified driver was pulled over and cited for defective tail lamp. They noted that the horse's back hooves were almost completely out of the back of the truck and the horse was secured in the pickup by the reins only.

Officers explained the traffic and animal safety concerns to the driver and summoned help from the local Livestock Barn to safely transport the horse to its destination.

The officers completed a case report for cruelty to animals which will be presented to the Polk County District Attorney's Office for review and possible charges.

Those who show horses at RodeoHouston are passionate about it, like 15-year-old Ivy Bailey, who shows Tequila.

For Ivy, seeing a picture like this is disturbing. "Horses get spooked really easily," Ivy said.

Her mother Waverly Bailey added, "That's animal abuse. She's the one that rides."

The picture, which is not affiliated with rodeo activities, was taken in Corrigan, Texas. The photographer who snapped it says the pickup driver was traveling at about 70 miles per hour.

New video into the KTRK-TV shows the reaction of one driver, Ami Parbs, who quipped how crazy the sight really was.

"It's unsafe. It's unsafe, because you don't know what the horse is going to do. He's so big over the sides," said horse owner Donna Skura, who is attending the rodeo with her daughter and grandsons.

"I wouldn't do that with a dog," Waverly said. "Put it in the back of a truck on a highway with a bed down like that. Not a horse."

Police in Corrigan say the driver claimed his truck that can pull the trailer wouldn't start, so he did this as an alternative.

Ivy says she would have sprung into action.

"If I was driving and I saw them on the freeway, I would chase them down and stop them and get the horse," Ivy said. "And keep the horse for myself."