Fisherman speaks after boat capsized by whale at the Jersey Shore 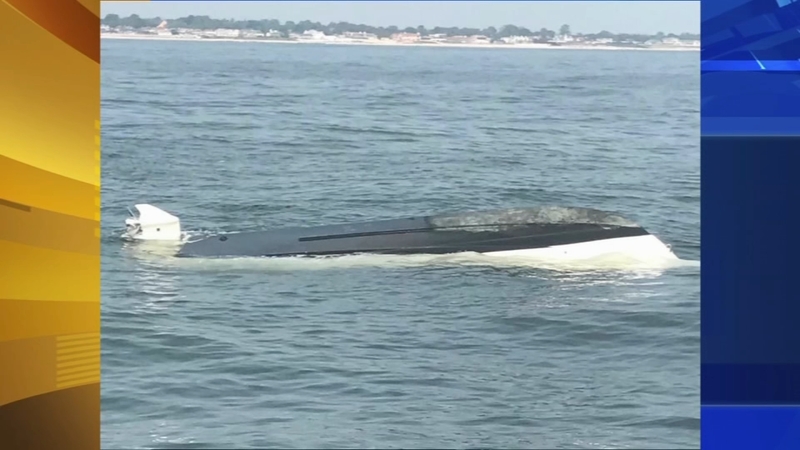 Man speaks out after boat he was in capsized by whale

DEAL, N.J. (WPVI) -- A whale emerged from the waters off the Jersey Shore on Thursday and capsized a small boat, sending several people into the water.

On Friday we got a chance to talk to one of those fishermen saved and one of the people doing the saving.

Jonathan Swingle is walking a little gingerly due to his sore legs. But since that's all that's wrong with him, he'll take it.

That's because Swingle absorbed quite the impact when, he says, a whale rammed the fishing boat he was on, causing it to capsize.

Swingle then swam to a Good Samaritan's boat.

And suddenly the great beast was before them! He was ten stories high if he was a foot! Yes, a couple of fisherman were capsized today when a whale surfaced beneath their boat! Fortunately, no one was injured. https://t.co/egABlt0Boj pic.twitter.com/gpsWKI281h

Luckily, he's able to tell his story thanks to the quick actions of Gay Szabo - he's the Good Samaritan that helped Swindle.

Swingle says just before their boat was flipped they were fishing off the shore of Deal, New Jersey.

"There was a whale that wasn't breaching. It was actually feeding. You could see it drive up through the mullet - mouth full of fish. Slam it shut and go back down," he said.

Swingle says the next time it drove up, it hit their boat.

"All of a sudden the boat is being shoved airborne. I got slammed into the gunnel as it was rolling up into my hip and thighs," Swingle said.

He has no doubt who the culprit was.

"Had to have been the whale because what else would have capsized the boat when it is dead calm out there," he said.

To their good fortune, an unknown vessel put out a mayday call, and retired firefighter Gary Szabo came to the rescue.

"A friend of mine and I were talking last night. He says 'Stuff like that always happens to you,'" Szabo said.

Within moments he had both Jon and his friend Bill Sobeck in his boat.

"I'm just glad I was able to get them out easily," Szabo said.

"The boat's going to be recoverable, from what I can tell," Swingle said. "What more can we ask for? It was a fun experience."

As for the whale, the New Jersey State Police say charges are pending against it.