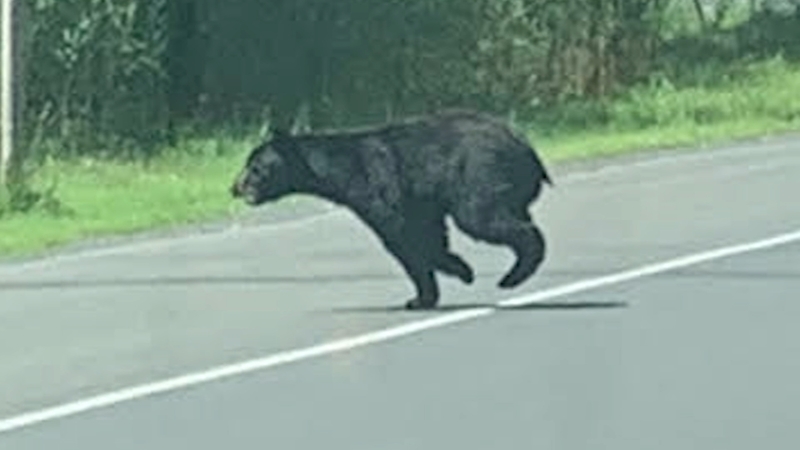 PERKASIE, Pennsylvania (WPVI) -- Police and the Pennsylvania Game Commission are on the lookout for one bear, possibly two, spotted in Perkasie, Bucks County.

A textbook case of being at the right place at the right time led to photos of a young black bear on the move.

"We saw the bear cross on Mountain View and he darted across into the woods," said Megan Smith, who photographed the bear on Tuesday.

The 15-year-old was behind the lens at the corner of Mountain View Drive and Route 313.

BEAR WATCH 🐻: Perkasie Boro Police & PA Game Commission are searching for one, possible two bears that have been spotted near Guth Elementary in the boro.

One bear was reportedly struck by a car this morning and may be injured.@6abc pic.twitter.com/vZVumnTU6D

In fairness, it wasn't completely by chance... the teen had been hoping for a second encounter.

"On June 8 we were over by Travelda Farm and we saw the bear jump into the woods," she said. "We've been looking out for him ever since."

It was at that point that her mom decided that trying to photograph the bear would be best left to her daughter.

"Oh, I was so excited, so excited and I'll tell the truth I tried to get a picture of the bear and I was on selfie mode," joked Keri Smith.

The same day, video of a black bear climbing Joanne Short's fence and strutting through her yard in Perkasie surfaced online.

"We didn't go out for the night after that," Short said.

Police said it was unclear if it was one or two young bears roaming the area.

However, they did note at least one bear was struck and likely injured Wednesday morning by a driver in the area of Ridge Road near Branch Valley Fish and Game.

The Pennsylvania Game Commission, which was called out to respond, said the behavior was normal this time of year.

"Wildlife lives up on that ridge," Short said. "Actually, the police said mama bear kicked them out, they had no place to go," she added.

Still, an encounter this close may be too close for some. The Smiths, however, are hopeful for at least one more good shot.

"They're so cool. Like, I am so excited about this," Keri Smith said.

The Pennsylvania Game Commission says, of course, do not approach the bear if you come across it.