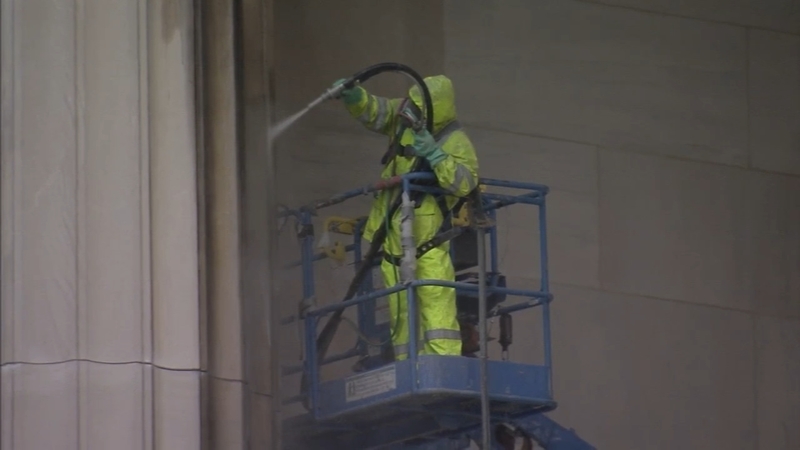 PHILADELPHIA (WPVI) -- Driving around 30th Street Station, it's hard to miss the workers on the job, restoring the facade of the train hub.

There's been scaffolding up for the last two years.

Amtrak's 30th Street station has been looking a little shinier lately- depending on what side you're looking at. They've been in the throes of an extensive restoration project of all the exterior surfaces of the building.

"The southeast facade here- the windows are done, the stone work's all done, all cleaned up. It will give you a good indication of what the entire station is going to look like," said George Bryant of Vega Solutions.

It's more than a transit hub.

We were able to get a look at parts of the building and construction, normally closed off to station visitors. The $109 million restoration project of the 85-year-old building's facade began in 2016.

Part of the challenge is orchestrating this massive project as this major transportation hub moves around it, including closing tracks and directing traffic.

"These are all above and beyond what you would normally do on a contraction project because this is an active facility," said Bryant.

Project planning began in the early 90s, but work was deferred until funding was available, the goal is to preserve the building's historic features.

That includes finding replacements to match the wires and patterned glass they no longer make. 950 limestone panels have been replaced.

"The stones actually came from Alabama, sent to Chicago for fabrication, afterward sent here and we replace the stones, the damaged stones, here," said Ajith Bhaskaran of Amtrak.

Cleaning the limestone is one of the most obvious differences. They use special techniques to not damage the stone.

"It's a micro abrasive of a very fine powdery glass. It's soft that won't damage the stone that we've mixed with water," said Don Seefeldt of Mark 1 Restoration.

The facade restoration is expected to be complete by next July.