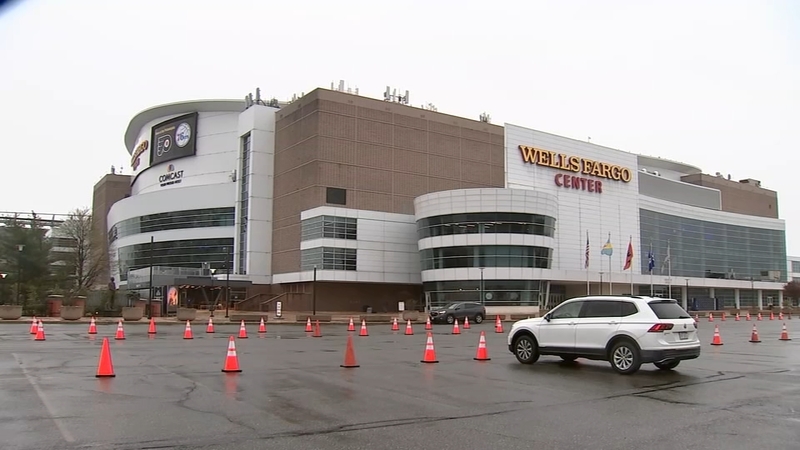 PHILADELPHIA (WPVI) -- The newly reinstated indoor mask mandate will impact Philadelphia 76ers fans headed to the Wells Fargo Center for Game 2 of the first round of the NBA Playoffs Monday night.

The mask mandate applies fans inside the arena.

"Face coverings are required for all guests (ages two and up) at all times within the Wells Fargo Center," the arena's website reads.

Fans, however, are no longer required to show proof of vaccination or proof of a negative test to enter the building.

Trying to win a playoff series, the 76ers will settle for another Ty game.

Tyrese Maxey showed the NBA he's a playmaking, risk-taking, building-shaking, future-star-in-the-making for Philadelphia with a Game 1 stamped in franchise history as one of the best of the millennium.

Maxey had a game for the ages -- specifically, one of four 30-point playoff performances on the same day by players 22 or younger - and became the youngest Sixer ever to score at least 30 points in a playoff game. Maxey's stat line in Game 1 against Toronto was worthy of, well, a Max contract as the Sixers romped to a 1-0 series lead. He made 14 of 21 shots and 5 of 8 3-pointers for 38 points in 38 turnover-free minutes.

foot on the gas all night. ⛽️

"The shots that he was making. The confidence," 76ers forward Tobias Harris said. "It was just all coming together. Even from the beginning of the game, he had it going."

Can he keep it going?

The 76ers head into Game 2 Monday against the Raptors on a bit of a confidence high after dominating a team they lost to three times in the regular season.

The Raptors are on shaky ground, not just because of a 20-point loss, but because of a sprained left ankle suffered by rookie Scottie Barnes in the fourth quarter. Barnes was hurt when Joel Embiid stepped on his left foot and he collapsed to the floor. He grabbed his left ankle and needed help off the court. Barnes had 15 points, 10 rebounds and eight assists in his first career playoff game.

Seems to be a theme.

NEED TO KNOW: The 76ers won Game 1 without Embiid, the NBA scoring champion, filling the stat sheet. He finished with 19 points and 15 rebounds. Embiid averaged 30.6 points. The Sixers don't expect Maxey to drop almost 40 points a game the rest of the series. The Big Man is going to have to carry the load if they want to win the series. But all was not lost. "He created a lot of points. His presence created a lot of points," coach Doc Rivers said. "That's why he's so great. His presence creates scoring for us."

KEEP AN EYE ON: James Harden. He became in Game 1 one of only seven players in team history with at least 14 assists in a playoff game. Like Embiid, the scoring punch wasn't there. He missed 11 of 17 shots.

INJURY WATCH: The Raptors could be in trouble if Barnes can't go in Game 2. Nurse said Barnes, Thad Young (thumb) and Gary Trent Jr. (non-COVID illness) are doubtful for Monday.

PRESSURE IS ON: Toronto. The Raptors went 3-1 against the 76ers in the regular season, so certainly not all is lost yet. But if injuries and foul trouble -- Fred VanVleet and Chris Boucher each fouled out in Game 1 -- continue to plague the Raptors, it could be a short series.