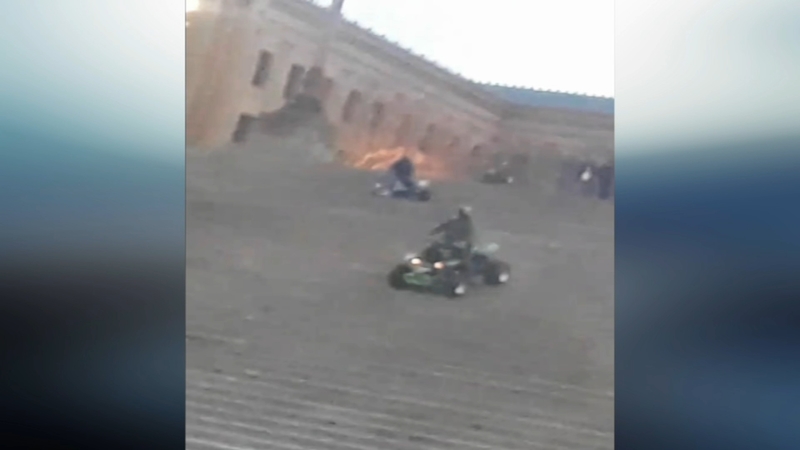 PHILADELPHIA (WPVI) -- It was an alarming sight at one of the most well-known attractions in Philadelphia.

Viewer video shows ATVs and dirt-bikes racing down the steps of the Art Museum while tourists look on.

The viewer who sent it to Action News was hoping we could get some answers from police.

"There was a group of people who arrived on ATVs and dirt bikes and motorbikes riding up and down the stairs," said that viewer, who asked only to be identified as Ray.

It happened around 4:45 p.m. Monday. The riders were seen barreling down the steps and doing donuts on the plaza, leaving skid marks behind.

"Nobody got hurt, thank God, but had they gone out of control or lost control doing tricks somebody could have gotten killed," Ray said.

ATV riding on city streets is an ongoing problem, but one police can do little to stop.

Because of safety concerns, department policy prohibits officers from pursuing any all-terrain vehicle with any motorized vehicle.

That means many of these riders get away scot-free, frustrating some Philadelphians.

"They don't care about nothing. They do what they want, they be in packs. They're just wild," said Alvin Brady.

A police statement reads: "We are aware of the incident, and take matters of public safety seriously. We will be increasing patrols in the area of the Art Museum."

Still, police say, they do employ targeted actions which have confiscated about 500 vehicles this year alone.

Police ask anyone who sees riders on city streets or property to call 911.