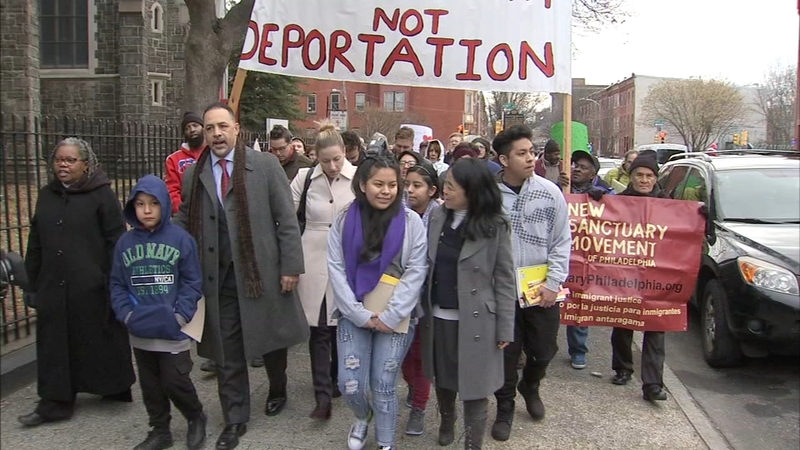 Children seeking sanctuary in church venture out to school

NORTH PHILADELPHIA (WPVI) -- Monday morning the Hernandez children were picked up to go to school from their new home at Church of the Advocate in North Philadelphia.

They are undocumented and just stepping foot outside of the building puts all four of them at risk of immediate arrest and deportation.

"We think positively so that everything comes out good and nothing bad happens," said Keyri Hernandez.

We talked to 13-year-old Keyri and her 15-year-old sister Yoselin Hernandez minutes before they headed off to school. I asked if she was nervous she said answer yes.

"They decided to go to go to school," said Carmela Apolonia Hernandez. "They are anxious. They got up at 5 in the morning to go to school. At first I was scared. But now I feel a lot of support."

Fleeing the violence back home in Mexico, the family has lived in Philadelphia for two years.

"Today these four children, Yoselin, Keiry, Edwin, Fidel are going to do what every single child in Philadelphia has the right to do. To go to school, to study and learn and feel safe and secure and joyful on these streets," said Councilwoman Helen Gym.

They were given deportation orders on December 13. Shortly after, the children were pulled out of school and they moved to this church.

"They are not even safe in this church," said Rep. Chris Rabb. "There's no law that says ICE can't come in right now and take this family away. It is common practice that these are sensitive areas."

Dozens of community members rallied behind them just outside of the building. Keyri Hernandez got emotional as she tried to thank them.

The family has a pending appeal in the Third Circuit Court of the United States.

Carmela Apolonia Hernandez said she will continue to attempt to find some normalcy for herself and her children until a resolution is reached.