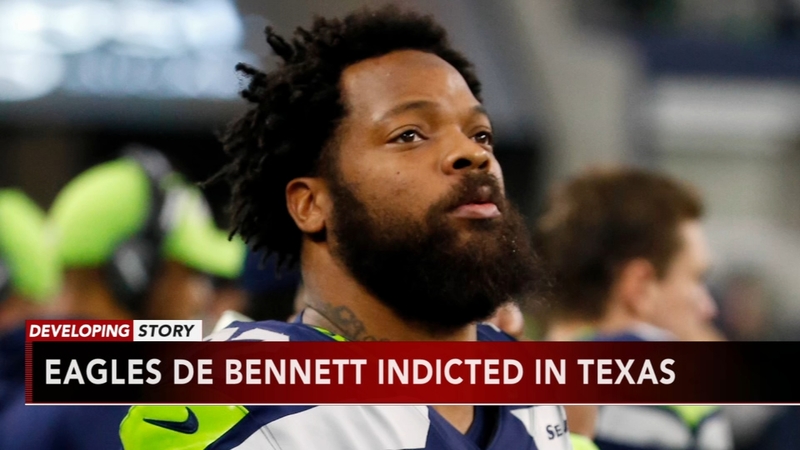 According to the Harris County district attorney's office, Bennett - who was a member of the Seattle Seahawks at the time - was at the game to watch his brother Martellus Bennett, a tight end for the Patriots.

After the Patriots beat the Falcons, investigators say Bennett was trying to get onto the field to celebrate. However, the DA said, Bennett was told by the security team - including the paraplegic 66-year-old woman - he had to use a different entrance.

That's when Bennett pushed through the security members, including the 66-year-old, authorities said. Bennett is also accused of pushing two other people, including another woman, and ignoring a request by a police officer to stop as he made his way onto the field.

Houston Police Chief Art Acevedo said Bennett allegedly told the people he had pushed, "You all must know who I am and I can own this (expletive). I'm going down to the field, whether you like it or not."

Acevedo called Bennett "morally bankrupt" for pushing the two women. Police said the disabled woman suffered a sprained shoulder when she was allegedly pushed by Bennett, hitting the back of her 800-pound, motorized wheelchair.

"Mr. Bennett may think that because he's an NFL player and some time passed ... he may have thought that, number one, rules don't apply to him, number two, he doesn't have to respect the dignity of a paraplegic woman who's trying to earn a living," Acevedo said at a news conference.

Acevedo said a detective did not actively start working the case until September because the police department had prioritized more serious cases.

Bennett was indicted on a felony charge of injury to the elderly. It carries a penalty of up to 10 years in prison and a $10,000 fine.

The DA said a warrant has been issued for Bennett's arrest, and prosecutors were working with his counsel regarding his surrender.

"We are aware of the situation involving Michael Bennett and are in the process of gathering more information," the team said in a statement. "Because this is an ongoing legal matter, we will have no further comment at this time."