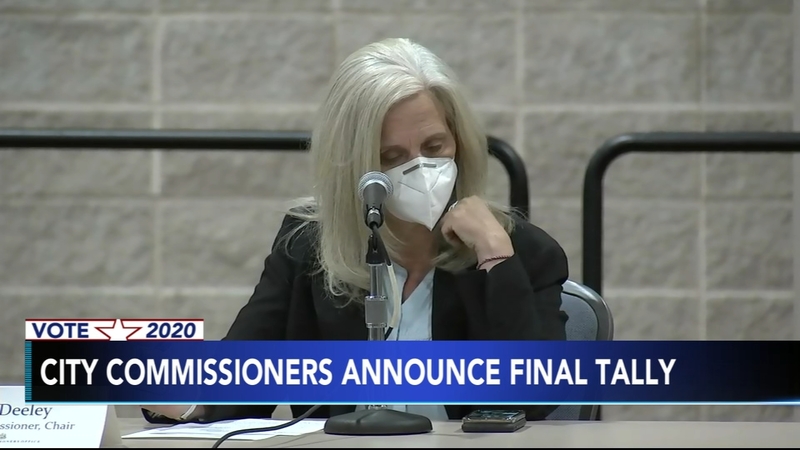 PHILADELPHIA (WPVI) -- On Tuesday night, City Commissioners announced the final tally in all the races on the Philadelphia election ballot.

This process, which happens after every election, is a formality, but it is in the spotlight this year, after the Trump campaign's allegations of voter fraud in the city.

Commissioners read aloud the final number of uncontested ballots for each race.

"The results remain unofficial for five days, and after those five days we will sign it and send it off to the secretary of state," said City Commissioner Lisa Deeley.

The Pennsylvania Supreme Court has ruled against the Trump campaign in a claim about access to ballot processing.

Tuesday's election reading comes as Rudy Giuliani, President Donald Trump's personal attorney, returned to federal court to accuse Democrats in control of big cities of hatching a nationwide conspiracy to steal the election, even though no such evidence has emerged in the two weeks since Election Day.

The court case is over the Trump campaign's federal lawsuit seeking to prevent the battleground state of Pennsylvania from certifying its election. Withering questions from the judge gave Trump's opponents hope that the lawsuit will be one of many filed by the Trump campaign around the country to be tossed out of court.

During several hours of arguments, U.S. District Judge Matthew Brann told Giuliani that agreeing with him would disenfranchise the more than 6.8 million Pennsylvanians who voted.

"Can you tell me how this result could possibly be justified?" Brann questioned. Giuliani responded, "The scope of the remedy is because of the scope of the injury."

They asked Brann to throw out the case, calling the evidence cited "at best, garden-variety irregularities" that would not warrant undoing Pennsylvania's election results, which delivered a victory for President-elect Joe Biden.

The Trump campaign's lawsuit is based on a complaint that Philadelphia and six Democratic-controlled counties in Pennsylvania let voters make corrections to mail-in ballots that were otherwise going to be disqualified for a technicality, like lacking a secrecy envelope or a signature.

It is not clear how many ballots that could involve, although some opposing lawyers say it is far too few to overturn the election result.

But Giuliani, the former New York City mayor, spent most of his time in court claiming baselessly that a wide-ranging scheme in Pennsylvania and elsewhere stole the election from Trump in battleground states won by Biden.

Democrats in control in major cities in those states - Giuliani name-checked Philadelphia, Pittsburgh, Atlanta, Las Vegas, Phoenix, Milwaukee and Detroit - prevented Republican observers from watching election workers process mail-in ballots so the workers could falsify enough ballots to ensure Trump lost, Giuliani claimed, without evidence to back it up.

"The best description of this situation is widespread, nationwide voter fraud, of which this is a part. ... This is not an isolated case, this is a case that is repeated in at least 10 other jurisdictions," Giuliani said, without citing any evidence.

Later, he claimed, "They stole the election."

The dozens of affidavits Trump's lawyers filed in the case, however, do not assert widespread fraud, but rather the potential for something fishy to occur because partisan poll watchers weren't given an opportunity to view the results.

Brann did not rule Tuesday. He canceled a Thursday hearing to air the Trump campaign's evidence and instead gave the parties three more days to file arguments in the case. Next Tuesday is the deadline for Pennsylvania's counties to certify their election results.

Trump's campaign has not been shy in previous weeks about publicizing what they say is evidence of election fraud.

But there is no evidence of widespread fraud in the 2020 election, and officials of both political parties have stated publicly that the election went well.

The Trump campaign argues that Republican-controlled counties in Pennsylvania did not allow voters to correct ballots and claims the inconsistent practice in Democratic-controlled counties violated constitutional rights of due process and equal protection under the law.

Two of the Trump campaign's co-plaintiffs are voters whose ballots were disqualified by counties that did not notify them about the problems.

If no county allowed voters to correct problems with mail-in ballots "it's very likely that the results would have been very, very different," argued Linda Kerns, a Philadelphia lawyer working alongside Giuliani.

"How does making it easier for some people to vote burden the plaintiffs' right to vote?" Brann questioned.

Mark Aronchick, a lawyer defending Philadelphia and Montgomery, Chester and Allegheny counties, disputed Giuliani's repeated contentions that it was illegal for counties to help people vote. A county should help people vote, he contended.

"What's wrong with that? What world are we living in here?" Aronchick argued.

During the hearing, Trump's campaign notched yet another loss: the Pennsylvania Supreme Court, in a 5-2 party-line decision, backed a Philadelphia judge's ruling that city officials had given Republican observers sufficient access to the vote counting, without allowing them within 6 feet.

The Associated Press and ABC News have declared Biden the winner of the presidential contest, but Trump has refused to concede and is blocking Biden's efforts toward a smoother transition of power.