Families of Philadelphia murder victims march for a voice 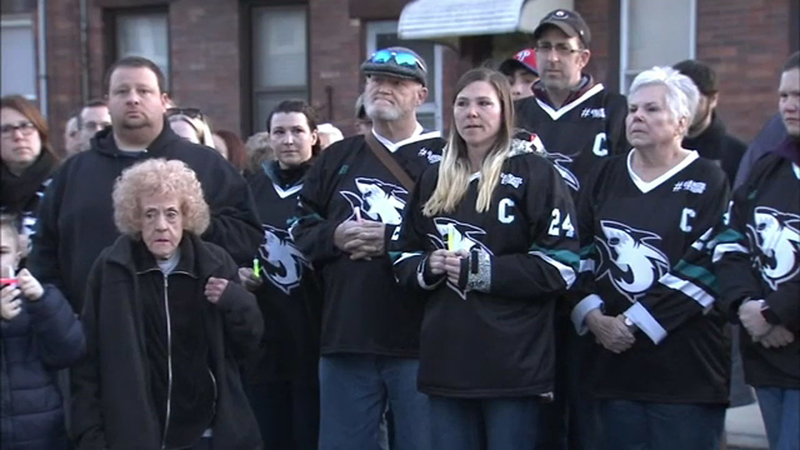 PHILADELPHIA (WPVI) -- Families of several murder victims gathered together Saturday to send a message to Philadelphia District Attorney Larry Krasner - they want to be heard and be involved in the justice system.

Bagpipes led the crowd through the city's Port Richmond section, stopping where 21-year-old Ryan Kelly was killed on Thanksgiving Day 2015.

Kelly's sister Amy Campbell described a recent meeting with prosecutors where they apologized for offering the defendant a plea deal without the family's knowledge.

"We were thoroughly counseled on the reasoning they were still going ahead with the deal. It's not what we had hoped for, but when they presented it to us we believe our best intentions were taken into consideration," she said.

The Kelly family hopes in the future prosecutors will keep the victims' families involved.

"Be in our shoes and think about if that was one of your family members that got killed, how would you want the punishment to be?" said William Kelly, Ryan Kelly's brother.

Amy added, "We want to be there. We want to be at the court hearings. We don't want to find out through media and newspapers and things like that."

On September 7, 2017, police say Gerry Grandzol was shot and killed by two brothers in front of his young daughter in Spring Garden.

Grandzol's family attended the rally and is pushing for the juvenile suspect, Marvin Roberts, who was 16 at the time to be tried as an adult.

Christine Grandzol Sheaffer, Gerard Grandzol's sister, said, "We really want to make sure that Marvin Roberts is not tried as a juvenile. We want him to go to the adult court system. He has priors and he did not give my brother a chance."

The families came to speak out but also to find support.

"You hope you never have to go through something like this in your life. But to have the support of other people out here - people who have gone through it - it's amazing," Christine said.

Action News reached out to the DA's office for comment and did not receive a response.