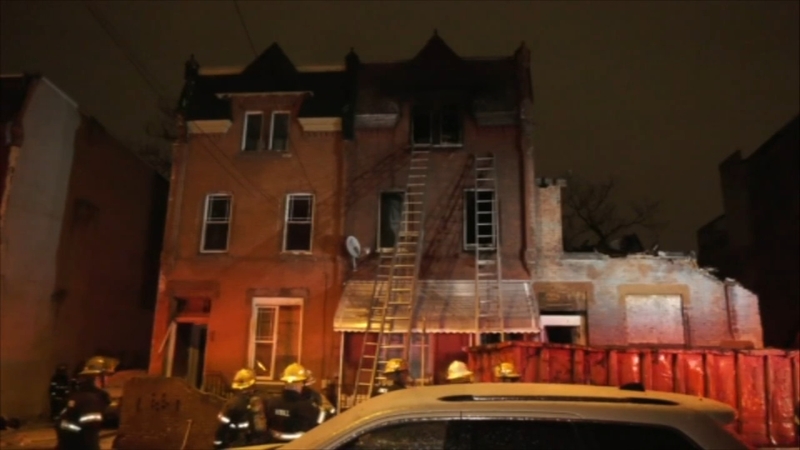 NORTH PHILADELPHIA (WPVI) -- From the beginning, the two-alarm fire in the 1800 block of North 21st Street last Tuesday had a number of twists and turns.

First, a person was found dead outside of the building. Then, fire crews had to trigger a mayday after firefighters went missing in the battle to put out the blaze.

"There was a second mayday call for missing firefighters as a result of the building collapse," said Philadelphia Fire Dept. Commissioner Adam Thiel.

The firefighters were rescued and as far as everyone knew, all the occupants had gotten out safely.

"We have identified a phone call at 4:37 p.m. on Friday, March 23, at our communication center and that was a call reporting some missing family members," said Thiel.

It was shortly thereafter that the bodies of 3-year-old Haashim Johnson, his mother 25-year-old Alita Johnson, and Alita's father 64-year-old Horace McCouellem were located on the third floor.

"I can say on behalf of all of the members of the Philadelphia Fire Department that while we can never share the family's pain, this is extremely upsetting to us," said Thiel.

Fire officials met with family members Tuesday to explain what had happened, but some were still upset.

"It still doesn't make sense to us at all and we're still searching for answers, we're hurting," said cousin Evelyn Cooper. "We are hurting, this is not right, you saved your people but you couldn't save ours. This is just not right."

Action News has learned Tyrone Duren is a former US Homeland Security Agent, indicted for stealing money and then laundering the money through real estate transactions in American and Croatian banks. Further, they say he has not paid taxes since 2009.

Late Tuesday night, Action News was informed that Jennifer Duren had pleaded guilty in the theft and money laundering scheme.

The question now is will Tyrone Duren be charged in connection with the deaths in the fire in the boarding home, which officials said did not have any working smoke or fire alarms.

"We'll be having a conversation with the District Attorney, laying out the facts of the situation and allowing him to make a decision," said Deputy Managing Director Bryan Abernathy.