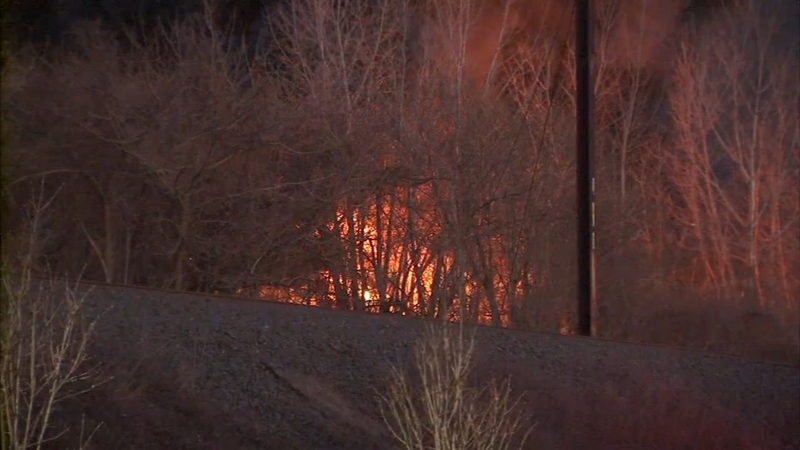 Fire officials said the tire and rubbish fire broke out in a remote area at or near the property of a junkyard in the Port Richmond section of the city just after 4:30 p.m.

"Extremely difficult conditions just to get to it, took us some time to get some ladders to it," said Philadelphia Fire Department Assistant Chief Tony Sneidar.

Fortunately the thick, billowing smoke was blowing away from nearby rowhomes and businesses, but it forced the shutdown of I-95 and all traffic on the Betsy Ross Bridge.

Over 100 firefighters used 45 pieces of equipment to battle the stubborn blaze, the bitter gusts of cold wind were not on their sides.

"I believe it's going to be a long drawn out operation," said Sneidar.

It took more than two hours to bring the fire under control.

The tire fire comes in the wake of a massive tire fire near I-95 back in the 90s that saw the creation of strict regulations on tires being stored near the freeway, but it is not clear if the tires in this latest fire were being stored on junkyard property or were the result of illegal dumping nearby.

"I mean after the I-95 incident a number of years ago, that was addressed," said Sneidar. "We've done a great job as a city to address that and have the support of the businesses of doing it the right way."

The blaze is the latest in a rash of fires across the city involving tires and/or railroad ties. The fires are not believed to be connected.

"I can't say that this was done by somebody one way or the other at this point," said Sneidar. "I would absolutely say that there is no reason to think that whatsoever."

Although traffic on I-95 and the Betsey Ross Bridge has resumed, the rail line used by Conrail remain shut down and it is unclear when it will reopen.

The fire is under control but is smoldering and firefighters will remain on the scene through the night to keep an eye on things.