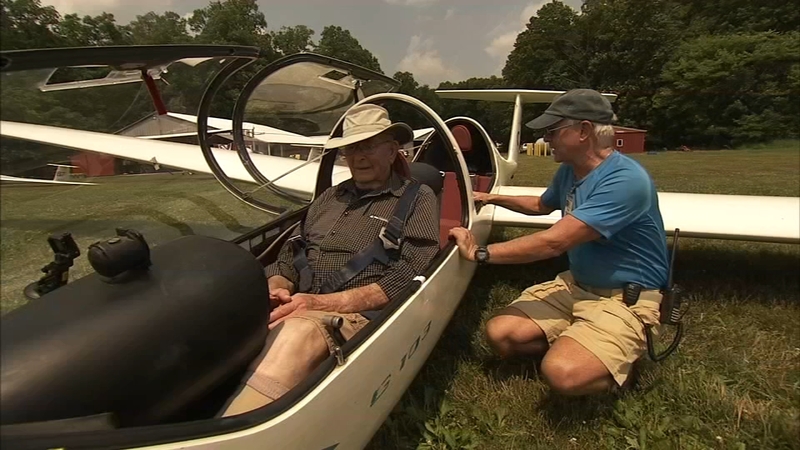 HILLTOWN, Pennsylvania (WPVI) -- The pandemic has led many around the region to seek out new hobbies and experiences, including one 95-year-old Bucks County resident who's proving it's never too late to try something new.

Wesley Enhanced Living resident George Coulton says he doesn't look for adventure, but he recently seized the opportunity for high-flying fun in a glider with the Philadelphia Glider Council, or PGC. Coulton visited the PGC's gliderport in Hilltown, Pennsylvania for the experience.

Josh Muska took residents on the gliding trip as part of the WEL Wishes program at Wesley Enhanced Living in Doylestown, where he serves as the fitness coordinator.

"The WEL Wishes program is getting residents to do things that they've always wanted to do," he explained. "We want to make those wishes happen."

"We're a club of about 100 members that just enjoy soaring. We are celebrating our 80th anniversary this year," he said.

Klauder says the glider they are riding in will ascend to 3,000 feet. Then they will take an aerial tour around Bucks County and see the sights.

A tow plane is used to get the glider into the air and when they reach the correct altitude, the glider is released.

"You're working with nature, so without an engine, we're always coming down through the air," said Klauder.

PGC President Dave Johnson says when gliding, you're constantly thinking about your next move.

"For every foot, it drops, it will go 36 feet forward and the trick is to try and find a pocket of air that's moving up," he explained.

Luckily for Klauder and Coulton, there were blue skies and plenty of puffy, cumulus clouds on the afternoon of their flight. Klauder says each one of those clouds sits at the top of some lift for the glider.

Coulton commented during the glider flight that he's "having fun."

"It's pretty exciting," said Muska. "That they get to go out and try something new."

But what goes up, must come down. After landing, Coulton describes the experience as "a nice ride."

"It's a joy every time I get to share flying with somebody else," said Klauder.

And Coulton was a satisfied passenger. "I loved it. I want to do it again," he says.