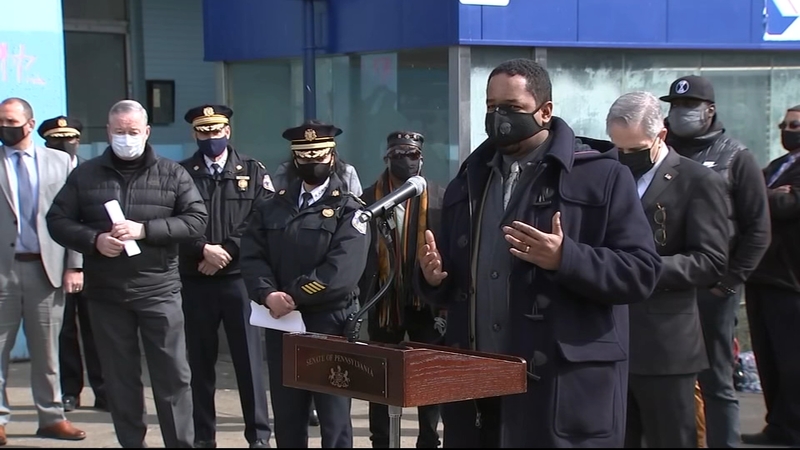 PHILADELPHIA (WPVI) -- As the number of homicides in 2021 continues to outpace 2020's already high numbers for Philadelphia, city leaders are encouraging the Pennsylvania legislature to step in and pass laws that could create a change.

"Our Pennsylvania legislature has not woken up," said Philadelphia District Attorney Larry Krasner. "(The Legislature) has not awakened; has not smelled the coffee."

Philadelphia leaders say state lawmakers have been delaying or blocking gun legislation for too long.

Street said among the pending bills is the recently re-introduced Senate Bill 217, which would require people to report lost or stolen handguns.

Street is working on legislation that would ban military-grade weapons and accessories. But he's concerned that the bill will never be brought up for a vote.

"We're playing Russian roulette with our gun laws," he said.

Mayor Jim Kenney also alleges that laws on the state level are preventing cities from enforcing their own local gun laws.

"Philadelphia already has sensible gun ordinances on the books which cannot become effective or be enforced because of the general assembly's actions," said Kenney.

They spoke at the Olney Transportation Center, where a mass shooting occurred last Wednesday afternoon. Eight people were shot in the incident which happened around 3 p.m.

"As horrible as this tragedy was, we are grateful it wasn't worse. Let me be clear, this is not normal and we should not let ourselves believe otherwise," said Commissioner Outlaw.

The City of Philadelphia and the ATF are offering a $25,000 reward in the case. Investigators haven't determined a motive for the shooting, but they have identified three suspects. All three are men are known to travel in an older blue Ford Explorer, police said.

The first suspect has a thin build and was wearing a green mask, dark pants, dark shoes, and a dark-colored jacket with white stripes down the arms of the jacket.

The second suspect is tall with a thin build and was wearing all dark clothing with white or light-colored shoes.

The third suspect has a medium build and was wearing all dark clothing. Anyone with information is asked to call 215-686-TIPS.

The fact that all three suspects are young men speaks to an even bigger concern with community leaders.

"At the end of the day, this is an issue for us as men in our communities. We have to step up to the plate," said Dawud Bey of the organization Put it Down, aimed at reducing street violence and encouraging young people to get into a better path.

DA Krasner has drafted new potential legislation in conjunction with Sen. Street. The legislation is focused on so-called "ghost guns," which can be bought in parts and assembled without ever having a serial number. He says reducing gun violence will only happen if "politicians have the guts" to pass tougher gun laws.

One aspect of preventing gun violence is providing gun buyback programs. On January 24, police collected what city leaders say was an "unprecedented" number of guns at another gun buyback event. Organizers say 224 people handed over their guns in exchange for ShopRite gift cards.

Commissioner Outlaw says the programs have been impactful and getting guns off the streets along with other efforts.

"At this rate, we are on pace to remove 6,000 crime guns from our streets," said Outlaw.

This weekend, there will be two gun buyback events. Each of them will offer a $100 ShopRite gift card to every person who turns in a gun. The events will be held on Saturday from 10 a.m. to 2 p.m. at Mt. Carmel Baptist Church (5732 Race St.) and Mount Airy Church of God in Christ (6401 Ogontz Ave).

Each event will offer a $100 ShopRite gift card to every person who turns in a gun.