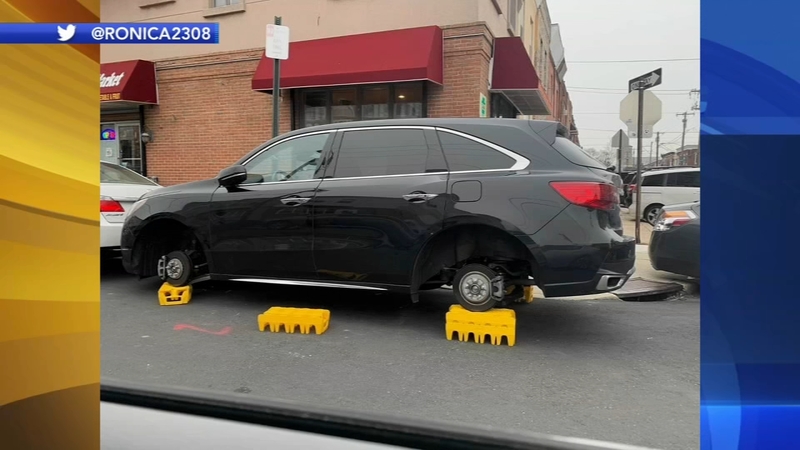 PHILADELPHIA (WPVI) -- Thieves are stealing the tires and rims from Honda Accords across Philadelphia at an alarming rate, police say.

On Tuesday, Action News reported on the problem in the Northeast, with at least 60 Hondas targeted in just the last eight or so weeks.

Thieves stealing tires and rims from Hondas in Northeast Philadelphia as reported by Dann Cuellar during Action news at 11 on February 12, 2019.

Several viewers from all across the city contacted us with pictures of their Hondas on milk crates after our story aired.

"I was going to work and I saw that I had no wheels. I was like 'Huh? How come?' I wasn't sure. I was sleepy. I was rubbing my eyes. I couldn't believe it," Aslamov said.

A few miles away at the Victoria Woods Apartments on the 9600 block of Ashton Road, bandits left another brand new Honda Accord sitting on soda crates.

Owner Keisha Wallace says she bought the car less than two months ago.

"Very upsetting," Wallace said. "We work hard for the things that you have and someone with nothing to lose just comes and strips it away."

At the Sherwood Crossing Apartments on the 3400 block of Red Lion Road, yet another brand new Honda was targeted.

Police say in all, 60 Hondas have been targeted in the last two months. The culprits always seem to strike in the middle of the night.

Police said this not just happening in the Northeast.

Rosenbaum says some victims have been targeted more than once.

"They've been hit three or four times; (the suspects) come back and hit the same car over and over again," Rosenbaum said.

Fortunately, these latest victims were insured, but they still had deductibles to pay and they had to miss work.

"I had to call out of work, I had no way to get to work," said Wallace. "Luckily I have insurance, but I had to go through the whole process of the police coming. It angers me and I'm just hoping that there's a way to prevent this from happening to other people."

Police are urging owners of 2015 to 2018 Hondas to park their vehicles in well-lit areas, preferably near surveillance cameras and, if possible, in a garage.